Examining our complex relationship with one of nature’s biggest animal. 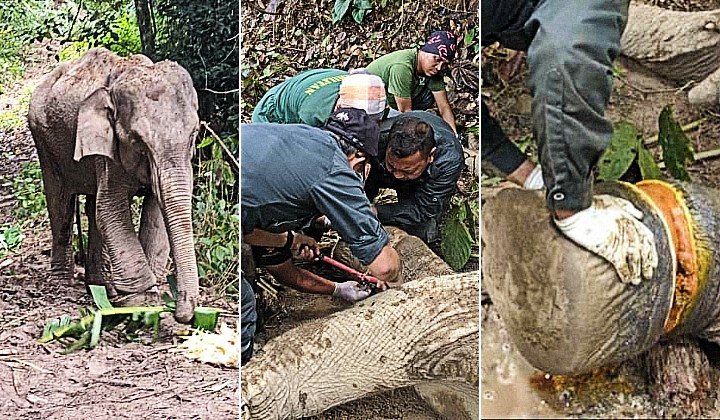 A wild elephant almost got its foot cleft off after being entangled in a hunter’s snare in Kelantan.

Wildlife authorities managed to rescue an endangered female Asian elephant that sustained injuries to its right foot after being ensnared in a trap near Kampung Renyuk in Jeli.

According to the Department of Wildlife and National Parks (Perhilitan) a call came in through the department’s hotline about a trapped elephant on October 9, 2020.

A team of 11 members from the Kelantan Elephant Capture Unit (UTG) and the eastern Ops Bersepadu Khazanah (OBK) wildlife crime task force, was dispatched to locate the animal on October 10.

The team later discovered the elephant with its front right foot caught in a wire trap, swollen and infected.

Fortunately, authorities were able to safely remove the snare from the elephant’s foot and provided it with food and medical attention.

However, Perhilitan said that the elephant was still unable to walk properly on its own and would remain under observation until it is fit enough to return to its natural habitat.

Read More: Grieving Mother Elephant In Johor Refuses To Leave Her Baby That Died After Hit By Car

Our relationship with one of the planet’s largest megafauna is so complex that experts even coined a term for it called human-elephant conflict (HEC), which examines the often detrimental impact of human-elephant interactions

Across Asia, elephants are under threat not only from habitat loss and environmental pollution but also from being viewed as a dangerous and deadly nuisance.

The Asian elephant has been documented to damage and destroy property by raiding farms and crops as they search for food, as well as to injure and kill humans that they come in contact with.

According to Perhilitan, in 2019, HEC within Peninsular Malaysia cost an estimated RM14.2 million in damages from elephants raiding local farms and plantations.

The conflict between humans and wildlife is caused by competition for food and space and is one of the biggest threats to wildlife around the world. HEC will cause dissatisfaction among those affected, leading to the pressure to translocate elephants from the area.

In order to find a peaceful resolution to coexist with these colossal creatures, Malaysia put into place the Management & Ecology of Malaysian Elephants (MEME) project in 2011 to further study and collect data on the country’s wild elephant populations with the end goal of developing evidence-based approaches to HEC.

It is estimated that there are less than 3000 individual elephants left in Peninsular Malaysia including the endangered Borneo Pygmy elephants found in Sabah.

Needing a large range of areas to survive, MEME’s research shows that Malaysian wild elephant habitats extend beyond the boundaries of protected national parks and reserves.

Data revealed that elephants in Peninsular Malaysia have lost 68% percent of their natural range to human encroachment in the last 40 years.

In the remaining 32% of space that they occupy, elephants are said to be living very close to human settlements, and often enough resulting in HEC in around 60% of these areas.

It’s hoped that with better data, the nation’s policymakers and relevant stakeholders can implement better strategies to find a balance between protecting our economic interests and to better preserve Malaysia’s flora and fauna.

Plan Your Next Nature Getaway At This Picturesque Homestay In Serendah