A lot of people looking for good honest work. 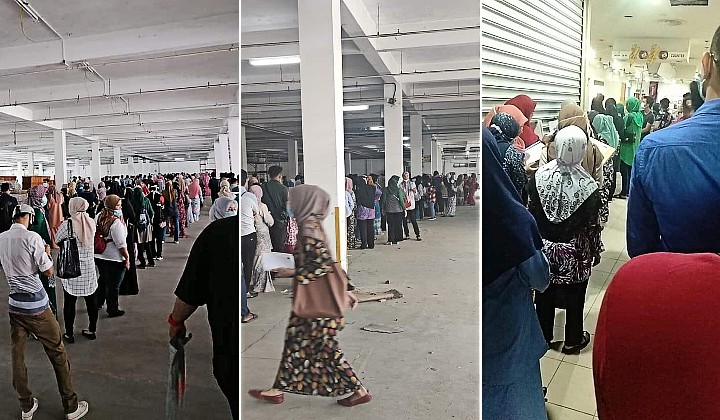 Netizens are disheartened by viral images showing hundreds of Malaysians supposedly lining up for jobs at a supermarket in Kelantan.

Footage shared online showed a massive queue where people were lining up in what appears to be an empty building, said to be a local Econsave in Kubang Kerian.

Huge crowds were seen standing uncomfortably close to each other, clad in face masks and formal wear, with many carrying files full of documents.

It is noted that in April 2020, Econsave’s official social media channels had posted a job ad for vacancies at its newly launching outlets in Kelantan, Perak, Johor, and Selangor.

And earlier in September, Econsave also advertised for an open walk-in interview session at its Kubang Kerian outlet, taking place between September 10 and 11.

From the looks of comments online, many appeared to show interest in available positions there.

Most Malaysian social media users were sympathizing with the plight faced by their fellow Malaysians, while others seem to be looking for someone to blame.

Based on data provided by the Malaysian Statistics Department (DOSM), as of 2019, Kelantan’s unemployment rate stood at 4%.

Following the pandemic and the subsequent economic slowdowns during the nationwide Movement Control Order (MCO) period, Malaysia’s overall unemployment level had skyrocketed to 5.3% in May 2020.

As of July, DOSM revealed that the nation’s unemployment rate had dropped slightly to 4.7%, where it’s estimated that there are over 745,000 Malaysians who are out of work.

Previously, Human Resources Minister Datuk Seri M. Saravanan had been quoted as saying that Malaysia could see as many as 1 million people unemployed by October this year.