It’s not as simple as life and death. 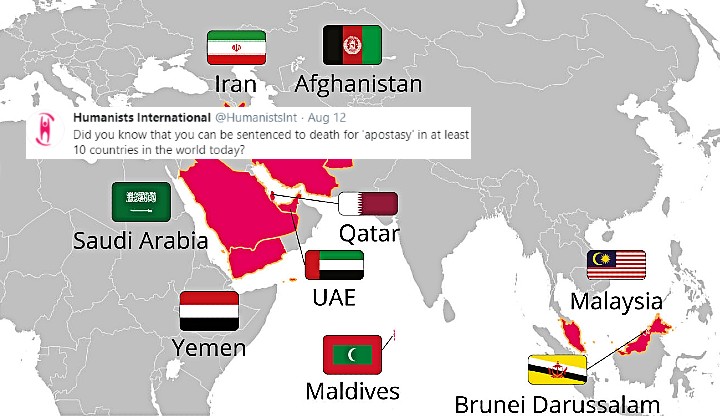 A Tweet made by an international non-religious organization, Humanists International, had placed Malaysia among a map of Muslim countries which it says issues the death sentence to apostates.

The tweet further led to an article that speaks about the freedoms of beliefs and how apostasy is considered a hudud crime in the state of Kelantan and Terengganu.

Read more about the right to apostasy in the world here: https://t.co/4mbziKGfjg

Social media users were quick to point out the inaccuracies in Humanists International’s statements.

Besides criticizing the organization’s questionable graphics, netizens also came to correctly state that Malaysia simply does not execute people for apostasy.

I am a Malaysian lawyer. You cannot be sentenced to death in Malaysia for apostasy. The graphic is misleading. https://t.co/MmryLuJoKq

Who made this kinda graphics???? I always encountered problem with matsalleh whenever i said “i was from Malaysia “ . They even thought, we legal child marriage, execute for being gay, and many negative comments. Seriously, who the **** did this ??

Agreed. The graphic representation is wrong about Malaysia. I know because it is a personal experience.

The truth to the matter is actually far more complicated.

Freedom of religion and belief is guaranteed under the Malaysian Federal Constitution, the highest law in the land.

However, Malaysia also maintains a parallel justice system that provides a certain level of autonomy to State Governments on the ruling of Islam and enactments in Sharia law.

In Malaysia punishments for renouncing Islam vary from state to state and can either include fines, jail time, the reappropriation of property, caning, or even sentenced to Muslim “rehabilitation” centers.

In Kelantan and Terengganu, failure to “repent” after renouncing Islam can land someone the death penalty under the states’ hudud laws, but implementations of the rule are restricted by federal laws.

Through the years, there have been many instances of individuals challenging the Shariah courts after publicly declaring that they were no longer Muslim.

Negeri Sembilan Mufti Datuk Mohd Yusof Ahmad was quoted as saying that although Islam does prescribe death to Muslims who renounced their beliefs, the country’s Sharia courts are unable to implement the punishment.