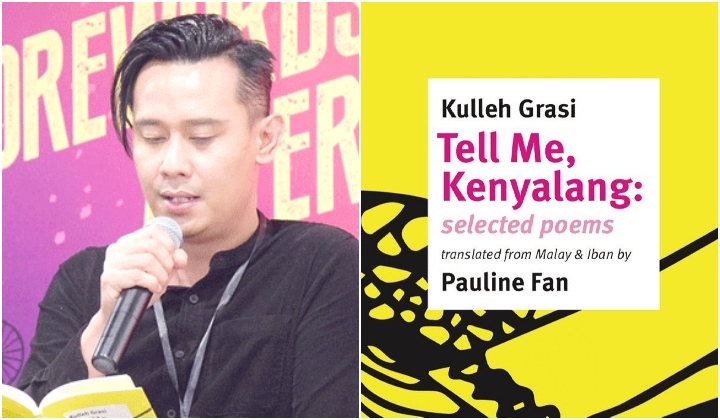 Malaysian author Kulleh Grasi recently made headlines amid the Covid-19 crises and MCO for being longlisted in the Best Translated Book Awards 2020 (BTBA) for his collection of poems titled, Tell Me, Kenyalang.

Kulleh Grasi is the pen name of Royston John Kulleh, a poet, singer-songwriter, and cultural activist of Iban descent from Kapit, Sarawak.

Speaking to Malay Mail, Kulleh said that the book is a culmination of his poems that he had been working on since 2002 that revolve around the themes of mythology, humanity, and nature mostly experienced and recorded by himself.Â

Published last year by New York-based publishing house, Circumference Book, Tell Me, Kenyalang was written in Malay and Iban with an English translation written on the next page by literary translator and writer, Pauline Fan.

According to Kulleh, it took him and Pauline almost two years to work on the translation of his poems.

We took that long as we needed to make sure the words and terms translated into the English language were correct. My two editors who are based in New York also made sure that the poems were good before proceeding with publishing the book.

BTBA is in its 13th year of honouring literature in translation. Its longlists feature both fiction and poetry by a diverse group of authors and translators from a variety of publishers, both big and small. This year, there are 35 books on the longlists which represent 20 different countries and feature authors writing in 18 languages. Kulleh is the only Malaysian on the list.

The shortlists will be announced by early May and the winning authors and translators will receive a monetary prize with the award.

Previously, Kullehâ€™s poems have also been published in the Malay-English journal, Naratif | Kisah (2016). He was also featured as a poet at the KL Literary Festival 2016 and at Nusi Poetry: Mosaic Memories in 2017, and as a poet and panelist at Yang Berani Hidup: Nusantara Festival of Malay Language and Literature 2017.

Get a copy of Kulleh’s book, Tell Me, Kenyalang, here.