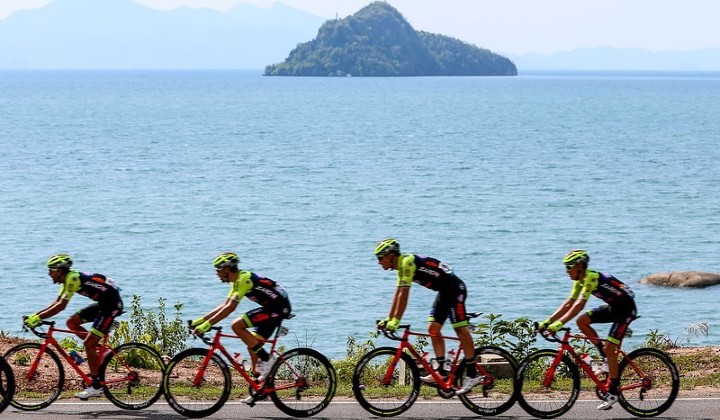 Le Tour de Langkawi (LTdL) has been around for more than 2 decades since it first started in 1996 with cyclists coming from all over the world, competing against each other in the yearly multi-stage race.

It was conceived by current Prime Minister Tun Dr Mahathir Mohamad who saw it as a way to woo tourists into the country and put Malaysia on the map.

Although some might think that after more than 20 years, the Tour has lost its luster, it still attracts dedicated local fans who would travel hundreds of kilometers to support their favourite cyclists and teams.

LTdL 2020, which is in its 25th year now, will commence for ten days, starting in Kuching before culminating at Langkawi.

What is Le Tour de Langkawi?

One of the biggest in Asia

The 2020 tour is the 25th edition of the prestigious race and covers a distance of 1,114.9km in seven states and two federal territories — Sabah, Sarawak, Terengganu, Pahang, Selangor, Perak, Penang, Kuala Lumpur, and Putrajaya.

To put that into perspective, it’s only 20km less than the distance between Johor Baru to Krabi (1,133km).

Do you notice during some parts of the race, they would present coloured jerseys to cyclists at the end of the stage? What does it mean?

Although you might think the tour’s multi-stage race is the only competition that’s happening, actually there are different competitions that are going on at the same time.

The most prestigious is the famous yellow jersey given to the overall leader, the green jersey is given to the sprinter who excelled at sprint sections where the leader is based on points, while the red jersey is for the best climber in mountain areas – hence the name, king of the mountain. The white jersey is presented to the best Asian rider in the tour.

A tour to bring tourists

Le Tour de Langkawi is the brainchild of Prime Minister Tun Dr. Mahathir Mohamad during his first stint as the country’s premier who envisioned the country as a sporting destination.

The multiple-stage bicycle race was first held since 1996, where it’ll usually begin in Langkawi before cyclists race past landmarks such as Genting Highlands and Dataran Merdeka.

Making a comeback after more than 20 years for the 2020 tour is Sarawak and Sabah as the first stage of the tour was held in Kuching while the pre-race criterium was held in Kota Kinabalu.

1997 was the last and only time Sabah and Sarawak were included in the tour.

The race is now sanctioned by the Union Cycliste Internationale (UCI) as a ProSeries race under UCI’s three-tier race structure and is among the biggest in Asia. It’s also part of the UCI Asia Tour.

ProSeries events are second-tier cycling tournaments which are below the UCI World Tour but are above the UCI International Circuits.

With it being an international event, there have been world-class cyclists who have competed in Le Tour de Langkawi with the inaugural winner being Damian McDonald from Australia.

Although Le Tour de Langkawi is an international sporting event, it has produced local talents who can compete with world-class cyclists such as Anuar Manan – the first Malaysian to win a stage and wear the green jersey in 2010.

Close to a decade after was Hariff Saleh’s to create history, becoming the first Asian to win two stages of the Tour de Langkawi after registering his first-ever win in Stage 2 from Senawang to Malacca in 2019.

Although it did give Malaysians a platform to compete on the world stage, the also tour has its fair share of negative press which mainly revolves around the issue of late payments, up to the point where organisers have to reassure cyclists the payment will be given on time.

There are reports about how teams are paid 6 months after the tour ended in 2017 due to mismanagement. What makes it even more shocking is that the team that received the late payment was a Malaysian team.

How much do you know about the Tour? Let us know on TRPâ€™sÂ Facebook,Â Twitter, and Instagram!