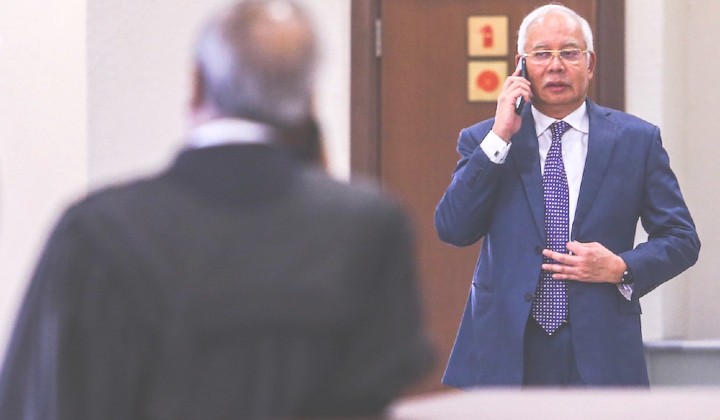 The revelations also gave birth to a meme.

Afterwards, the former premier said he was shocked as to how a PM’s telephone conversations could be tapped, but even more surprising was that it was actually Najib’s government which amended the Criminal Procedure Code 2012, allowing the authorities to do just that.

It was Najib's government who introduced amendments to the Criminal Procedure Code to allow for interception, listening and recording of communications in 2012.

Yeah, Najib's government made it legal for the Government to spy on you.

Jokes aside, MACC said the recordings were sent anonymously which raises the question about the rights and privacy of Malaysians.

Can your phone conversations be recorded secretly without you knowing?

We’ve talked to lawyers on the matter and this is what they have to say:

If the one recording is a civilian

It might sound harmless to secretly record telephone conversations but under the law, it’s actually illegal for Malaysian citizens to do so.

This is stated in the Communications and Multimedia Act 1998 where those without lawful authority can’t intercept or attempt to intercept, any form of communication.

Those found guilty are liable to a fine of RM50,000 or imprisonment for a term not exceeding a year, or both.

What if it’s recorded by the authorities?

Authorities can monitor and also detain a person if that person might be a security threat and there a few laws that allow for this, such as the Security Offences (Special Measures) Act 2012 and the Criminal Procedure Code 2012.

Despite having the power to do so, the lawyers note that there are rules and provisions which have to be strictly complied with and illegal wire-tapping can’t be done by the enforcement agency.

How about if companies do it?

Companies are not allowed to take your information without your consent as stipulated in the Personal Data Protection Act (PDPA) 2010.

This is why the company would tell you the call is recorded because you are entitled to be informed if your data is being processed by the company.

The law also allows you to ask for your data from companies and they have to hand it over.

Reporters are known to use recording devices during interviews for accuracy purposes and the lawyers say it’s legal but they should obtain the consent of the interviewee.

This consent can also be given in the form of when an interviewee doesn’t object to the reporter putting out a recorder before, or during, an interview.

Is Najib the first one to be tapped?

Although everyone was shocked by the news, it might not be the first time that a powerful Malaysian public figure’s phone was tapped.

Allegedly, there were previous cases such as when the Johor Royal Crown Prince Tunku Ismail Tunku Ibrahim who claimed that his mobile phone was tapped and monitored by the police.

He said he was “clueless” as to why his movements are monitored by the Special Branch and said that there were no provisions for any quarters to act in such a way as he is not a threat to the country.