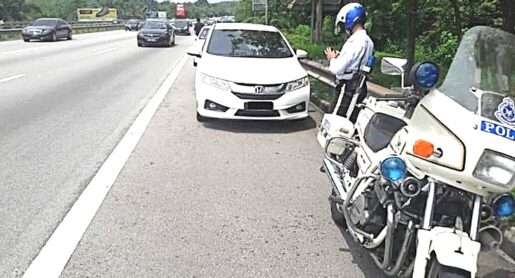 Everyone hates being slapped with a saman for traffic violations. That small piece of paper that youâ€™re handed when you get stopped by the authorities or receive in the mail can at times fill you with so much dread and resentment.

But despite our personal feelings and angst towards being charged with an offence on the road, the concept of traffic summons is easy enough that even a 5-year-old can understand, that is if you break the law, you need to pay the price.

Year after year, authorities would still give out millions of summons for various traffic offences and violations committed by motorists nationwide.

And yet every year, authorities would also bagi chance for delinquent motorists to settle their traffic summonses at a discounted price.

At the start of 2020, yet another discount campaign was announced by the authorities.

The offer will let motorists pay off their traffic summons at a 50% discount via online payments through MyEG and Rilex.com from January 18 till February 2.

But the question is, why is this happening and does it impact the overall enforcement on road safety and traffic regulations in the country?

We tried reaching out to the Transport Ministry for further comments on the matter and are still waiting for a reply, but in the meantime here is what itâ€™s current minister, Anthony Loke, had to say about it.

Malaysian motorists are not bothered by summons

At the start of 2019, the ministry had placed a â€œzero-tolerance policyâ€ towards traffic violations and ordered the Road Transport Department (JPJ) to cease the practice of giving out giving discounts for traffic summonses.

The move was said to create a climate of fear and educate road users to simply abide by the rules and take the law seriously by having offenders pay their penalties in full.

Loke mentioned that the practice of giving discounts was sending the wrong signals to the public, making motorists unaffected by the penalties they receive.

This would also ultimately result in Malaysian road users bluntly ignoring their responsibilities on the road as the repercussions from such offences are minimal.

Rule breakers would simply wait for the next â€œdiscount seasonâ€ to pay off their dues or not pay them at all.

When do you normally pay traffic summons?

But the ministryâ€™s effort to streamline the no-tolerance policy had hit a snag as police and local authorities are unsure that harsh penalties alone were enough to educate the public to be better on the road.

According to Bukit Amanâ€™s Traffic Investigations and Enforcement Department (JSPT) less than 30% of Malaysians actually pay their traffic summons.

It was reported that out of the 5.7 million traffic summonses that were issued in 2018, only 25% have been paid and accounted for.

JSPT director Deputy Commissioner Datuk Azisman Alias said that if authorities did not promote discounts, they would simply continue to be unpaid and this would result in the government losing out on revenue.

The Deputy Commissioner also argued that the â€œdiscount approachâ€ was currently the best means of getting the motorists to actively pay their dues without law enforcement harassing the public.

If you still remember, back in 2015 the police began a nationwide operation named Ops Warta where motorists with outstanding summonses and arrest warrants were tracked down by authorities and brought to justice.

That year, 240,000 of the 1.59 million outstanding arrest warrants that extended as far back as 1990 were finally settled as police set up roadblocks and went door-to-door to arrest traffic offenders.

This would seem to prove that hardline enforcement does work to get Malaysianâ€™s to take responsibility for their actions, right? But would you want to spend the night in jail just because of a few unpaid traffic summons?

So letâ€™s discuss, is it a good idea to give out discounts for traffic summons, or would you prefer the zero-tolerance approach to get Malaysian road users in line with the law? Share us your thoughts in the comments of our Facebook, Twitter and Instagram.

RM888,000 To Be Won In The Year Of The Rabbit With Lotus’s ‘Sama-Sama Huat’ CNY Campaign