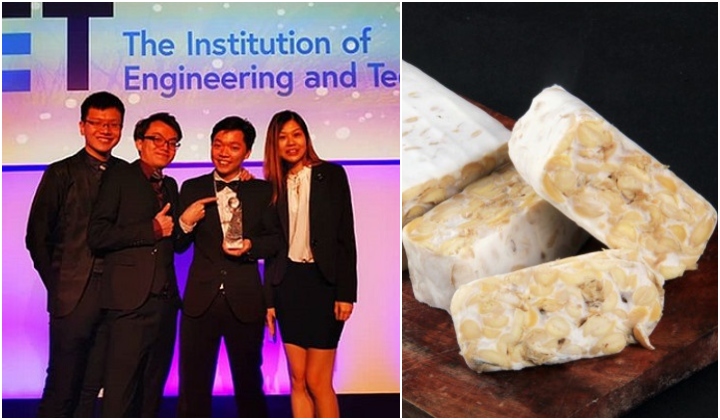 Plastic waste is a huge problem for the planet. Itâ€™s clogging our drains, choking the seas and harming both animal and human health.

While the Malaysian government has launched a national plan towards zero single-use plastic by 2030 (and several plastic bans), we still have some ways to go in finding alternate solutions.

Luckily, a group of inventive Malaysian students had a pretty impressive idea that just might save the world.

The global engineering challenge is organised by UK-based The Institution of Engineering and Technology (IET) in partnership with Greenpeace and GreenSeas Trust.

Presented with the challenge of reducing plastic waste by tackling unnecessary use at supermarkets, the four PhD students put their heads together and came up with the PICAS block!

Much like the tempeh block where soybeans are bound together, the PICAS block (Packaging in Carrageenan and Starch) binds dry, loose food products together using carrageenan (made from red algae) and starch to create dissolvable food blocks.

Starch is used as the internal binder while carrageenan is
coated on the outside of the block to form a physical barrier against moisture
and contaminants.

The idea is basically to package dried beans and grains together in a block instead of scooping out dried lentils into plastic bags and weighing them every time you feel the urge to make dhal because you miss your mumâ€™s cooking.

The main aim of this solution is not to propose an alternative biodegradable packing material, but to come out with an entirely new way to sell dried food that is easier to use.

Imagine reaching out for a block of beans the same way you would for an orange, or an apple, and placing it directly into your shopping basket at the market. No plastic bags needed!

Itâ€™s also pretty easy to use. Just drop the PICAS block into a pan of hot water and the carrageenan film turns into soft jelly thatâ€™s easily peeled off while the starch just dissolves in the water.

If youâ€™re having trouble visualising what the product looks like and its use, we present you this amazing explanation video by Team NanoMalaysia, complete with novice acting by the researchers:

Project leader, Ivan has also mentioned that they have plans to further develop the PICAS block and hopefully get it commercialised in the near future.

Weâ€™re looking forward to seeing their innovative solution in supermarkets worldwide as we battle plastic use. In the meantime, it looks like banana leaves may be the solution to Malaysiaâ€™s plastic problems.

Students Criticised For Planning To Marry In Thailand Without Telling Parents