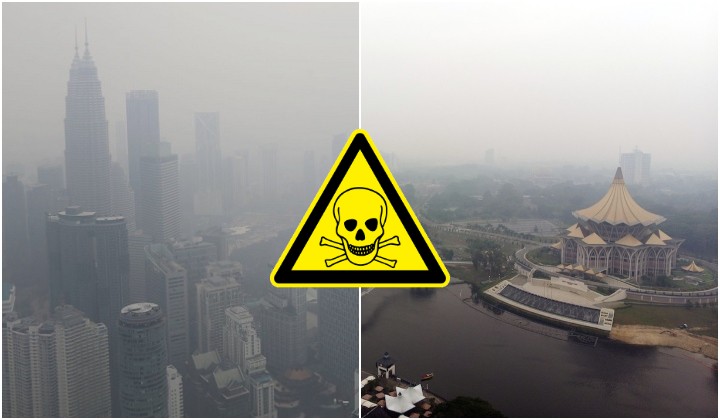 Itâ€™s obvious to everyone that the haze is really bad this
year. The smell of smoke lingers in the air, our bodies itch and it feels like
weâ€™re living in Silent Hill.

Well, the once pristine Kuching has been declared as the worldâ€™s MOST air-polluted city!

Thatâ€™s not all, KL is the THIRD most air polluted city
in the world!

Each cityâ€™s air quality is rated based on the Air Quality Index (AQI) readings where:

On the World AQI Ranking today (17th September), Kuching holds the worldâ€™s most air-polluted crown with a detrimental API of 220, while â€œluckyâ€ number 3 is KL with an unhealthy API of 157.

New Straits Times reported that the quiet city of Kuching topped the list on Sunday (15th September) with an AQI of 202.

Meanwhile KL was on top of the
list earlier last Wednesday (11th September).

Unfortunately, there is more disturbing
news to the worsening air caused by the haze. Today (17th September),
Sri Aman in Sarawak records a hazardous API reading of 367.

The haze caused by smog in several Indonesian provinces that are carried over by the southwest monsoon winds is expected to last until the end of the month or early October when the monsoon period ends.

Things also seem to be getting worse as Malay Mail reports that 145 schools across Selangor are closed today due to the increasing severity of the haze.

Be sure to keep yourselves safe by wearing an N95 mask and checking out our other tips to protect yourself HERE and your pets HERE.