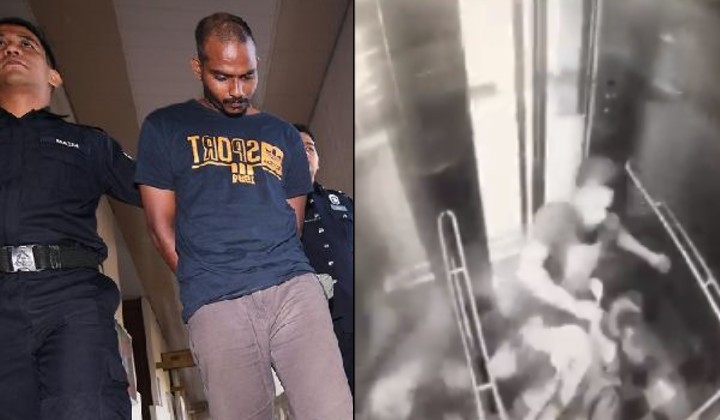 Today, 26-year-old G. Thinathayaalan, who brutally mugged a woman in an elevator at the said MRT station in Cheras was sentenced to 18 years in prison.

The man had been arrested last February, with police also noting that he had been a hardcore drug addict at the time.

The verdict was made at the KL Sessions Court earlier today where Judge Mahyon Talib also included five strokes of the rotan as punishment for his crimes.

The defendant, who reportedly was not represented by a lawyer during the hearing, had earlier pleaded for a lighter sentence. (which was obviously denied)

The accused was charged under Section 394 of the Penal Code, which carries a maximum jail sentence of 20 years and strokes of the cane.

Earlier this year, the country was left shaken when footage of the atrocious assault and robbery became public.

The 57-minute viral recording of a closed-circuit television camera (CCTV) showed a man in a black shirt violently punching and kicking the 48-year-old victim several times before making an escape.

Police are looking for this man who attacked and robbed a 48-year-old woman in a lift at the Taman Mutiara MRT station on February 14 at 6.45am. The victim was not pregnant as has been circulated but has received outpatient treatment for her injuries. pic.twitter.com/KVUMDoyWwf

The horrific incident had been at the top of public discussion for months with Malaysians across the country condemning the ghastly crime.

Well the nation would be glad to know that justice has been served at last!