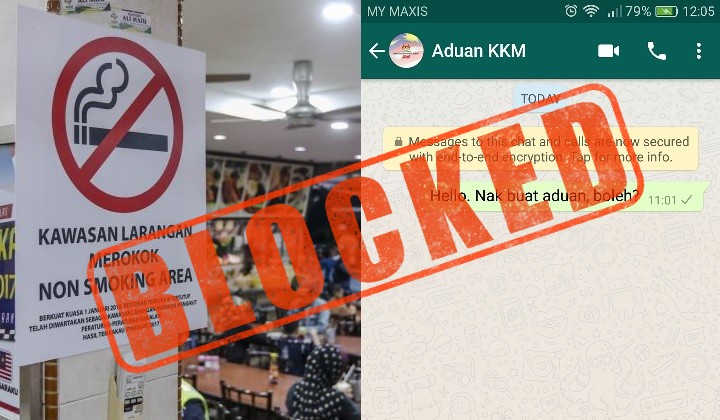 Remember the smoking ban that took place earlier this year?

You knowâ€¦ The one that banned smoking at restaurants and eateries, including mamaks that incensed MANY smokers who were wheezing in anger.

To get the public involved in nabbing the smokey bandits, the Malaysian Health Ministry set up a WhatsApp hotline. All anyone had to do was drop a text with the (1) restaurant name, (2) location & address of restaurant and (3) type of offence.

Yeah, no. Turns out that the hotline number got BLOCKED BY WHATSAPP.

Free Malaysia Today (FMT) discovered that the hotline number 60108608949 did not receive messages sent on WhatsApp with no double tick to show that the messages were received by the Health Ministry.

We also checked by sending a WhatsApp message to the number and yeah, no double tick, only a single tick. (still no response at time of writing)

FMT also reported that the number was hit with numerous privacy complaints, which led to WhatsApp blocking the number.

Itâ€™s unclear exactly which privacy-related terms of service was violated, but we checked and narrowed it down to this bit under ‘Legal and Acceptable Use’:

Well, the health ministry hasnâ€™t given up hope yet. In a press release, Health Minister Datuk Seri Dr Dzulkefly Ahmad has stated that they will be meeting with Facebook (parent company of WhatsApp) to resolve the issue as soon as possible.

You can also call 03 88924530 to lodge a complaint. Bear in mind that calls can only be made during office hours, though.

Remember, the smoking ban applies within a 3-metre radius of an eatery and the penalty is quite heavy.

Those caught smoking will be fined up to RM10,000 or face 2 years jail time, while the eatery operators who allow customers to smoke in their premises will face a maximum fine of RM2,500.

Health Ministry Approves Moderna Covid-19 Vaccine For 12YO And Above