Many took to Twitter to voice their frustration after Rapid KL announced the closure of 16 stations along the Kelana Jaya line for almost a week. 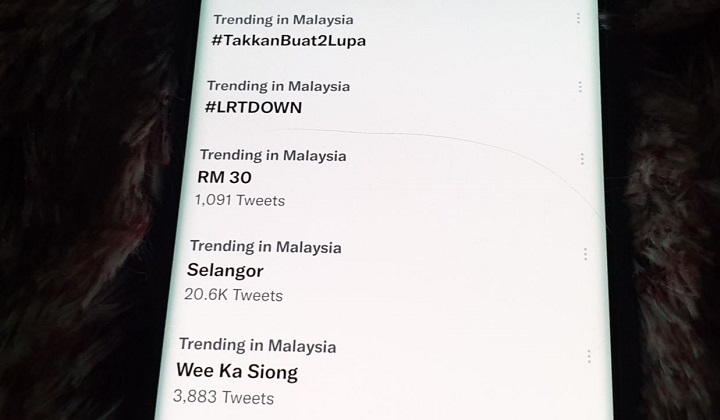 It’s been a busy day for Malaysians on social media today and this can be seen in the top 5 trending hashtags on Twitter.

LRTDOWN was number two on the list earlier today. It all started when Rapid KL made a jaw-dropping announcement that 16 LRT stations on the Kelana Jaya line would be closed from today until 15 November.

In the number one spot is #takkanbuat2lupa. Now this is not a self-explanatory hashtag. Here’s a summary of how it came to be. Incumbent Pengerang MP Datuk Azalina Othman Said and incumbent Muar MP Syed Saddiq Syed Abdul Rahman exchanged tweets over the much-debated citizenship issue.

Syed Saddiq posted on Twitter saying not to use the citizenship of Malaysian children issue as an election promise.

“Where were you when they were going up and down JPN (National Registration Department) and courts just to get the rights they have been denied for so long?” he asked.

Azalina replied to him asking wasn’t it a Barisan Nasional (BN) MP who had led the Parliamentary Special Select Committee (PSSC) on women and children, asked multiple questions in Dewan Rakyat on the issue and was the initiator of the Private Members Bill that “you copied and pasted for submission”.

She was referring to herself as the BN MP in question.

To this, Syed Saddiq replied:

Azalina, not backing down, replied again, with the hashtag #takkanbuat2lupa.

Unfortunately for her, the hashtag made it to the trending list because Netizens chimed in and starting using it to berate BN.

In third place is RM 30, but we’re not sure why, and it could be because others were wondering too, so it trended because people were asking why it was trending. So we’ll just throw that into the ‘selingan’ pile.

Selangor is in the Top Five and that’s about the only good news we’ve had today. 18 November has been declared a public holiday for the state as well as Negeri Sembilan in conjunction with 19 November’s polling day (GE15). Another contributing factor to why Selangor was trending was the floods which hit several parts of Shah Alam yesterday.

So there you have it, the five major things Malaysians talked about on Elon Musk’s new baby.