A four-star hotel recently claimed that it has put up ‘non-halal lift’ sign as part of Jakim’s halal certificate requirements. 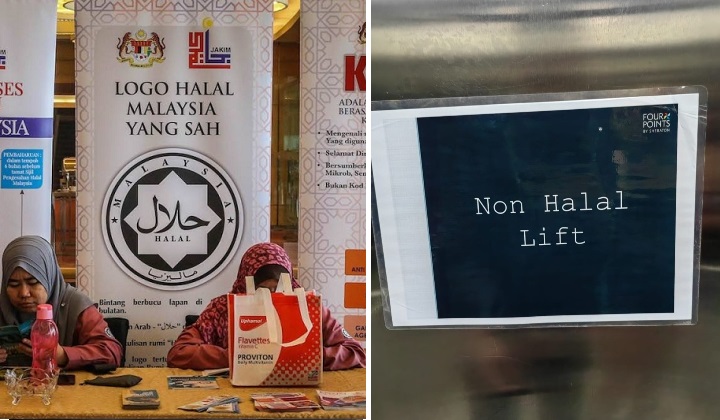 The Islamic development department (Jakim) has denied that the department necessitates hotels and premises to put up the ‘non-halal lift’ signs as part of halal certification requirements.

According to Bernama, the department stated that there is no clause in the Malaysian Halal Certification Procedure Manual (Domestic) 2020 and the Malaysian Halal Management System 2020 which requires hotels or premises to put up the “non-halal lift” sign.

Hotels or premises however can establish any mechanism they see fit in accordance with the procedures set to maintain the integrity of Malaysia’s Halal Certification.

“Jakim would like to refer to a media report regarding a hotel in Kuala Lumpur that put a ‘non-halal lift’ sign on one of its elevators to move non-halal perishable goods.

“In the report, it was also stated that the instruction regarding the placing of the sign was a regulation stipulated by Jakim,” the department said in a statement.

Previously, lawyer Siti Kasim uploaded a picture of a sign stating “non-halal lift” in a four-star hotel on Twitter and asked why the hotel needed to put up such a sign.

So, a friend of mine took this photo at Sheraton Four Points. Can @FourSheraton explain the rationale behind this? 🤔 🤯 pic.twitter.com/LeG34wW3Ie

The Star reported that the hotel management, in commenting on the matter, said that the hotel needs to put up a sign on the lift which carries non-halal and perishable goods as “part of the halal certification requirements.”