Over a third of Pakistan is under water, with 33 million people affected by the massive floods. 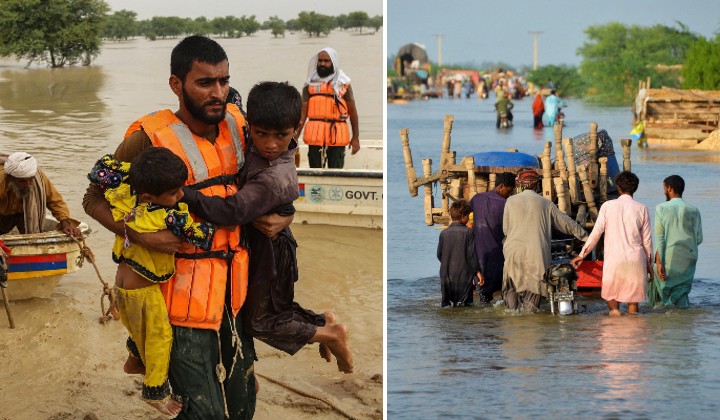 A third of the country is under water after a “monster monsoon” hit Pakistan, reports Pakistan’s Climate Change Minister Sherry Rehman, who also called it a “crisis of unimaginable proportions”.

Officials say at least 33 million people — one in every seven Pakistanis — have been affected by the floods, which have killed 1,136 people since the monsoon began in June.

Videos show entire buildings, roads, bridges, and other infrastructure swept away by torrenting floodwaters. Over 220,000 homes are destroyed & 2 million acres of cultivated crops have been wiped out, with farmlands turning into entire waterscapes.

They have experienced over eight weeks of continuous monsoon rain, which was a whole fives times higher than the country’s average rainfall.

Climate change is the biggest cause

Scientists are saying that the biggest contributor to this devastation is climate change. Pakistan’s 2010 superfloods were also impacted by global heating. Warmer air holds more water, and all this affected the jetstream, which is the high-level wind that circles the planet. As a result, it led to significantly stronger and longer rains.

Furthermore, a 2021 study suggests that global heating is making the south Asian monsoon more intense and more erratic, with each 1C rise in global temperature leading to 5% more rain.

4/ The government has warned that 33 of these lakes, all located in the spectacular Himalaya, Hindu Kush & Karakoram mountain ranges that intersect in Pakistan, are at risk of bursting & releasing millions of cubic metres of water & debris putting 7.1 million people at risk pic.twitter.com/HSTE9sjm5q

Additionally, Pakistan has the world’s largest amount of glaciers outside of the Arctic. They have over 7,000 glaciers, which hold millions of cubic metres of water. When these glaciers melt, they turn into glacial lakes and feed mainly into the Indus River. These melting glaciers, coupled with record-high rainfall, means that there is simply too much water.

In fact, the UN has already warned of the risks of outburst flooding, as glaciers in Pakistan’s northern Gilgit-Baltistan and KP regions are melting rapidly due to rising global temperatures, adding to the already formed 33 ice-dammed vulnerable lakes, creating more than 3,000 lakes.

How can we help?

Following the incredible devastation, Pakistan has declared the super floods a national emergency.

Rehman has asked for international aid, stating that the catastrophic floods far exceeded the 2010 superfloods and has stretched the country’s resources past its capability.

We are battling the biggest monsoon floods seen in living memory in Pakistan.Bigger than the 2010 superfloods.The catastrophe has stretched all resources so thin on the ground that human vulnerability is high,& without Intl help many r at risk @BBCWN pic.twitter.com/Xx8cBYc4sn

The Malaysian government has yet to announce aid relief for Pakistan. However, Malaysian NGOs have already began to mobilise personnel and aid to help out.

The Pakistan High Commissioner is working with NGOs to collect funds for flood victims. The Pakistani government will identify and coordinate funds allocation based on needs.

At the same time, medical personnel are welcome to join humanitarian teams to be sent by Malaysian NGOs, including GPM.

6/ No-one can escape the impacts of climate change. However, climate effects are not uniform. The Global Climate Risk Index 2021 indicates the poorest countries of the world, whilst registering the lowest industrial pollution levels, are most susceptible to climate change damage pic.twitter.com/MYYi2nYrhn

However, they might need to bear their own cost depending on the donation collected from the public.

We need medical personnel to help set up medical camps and bring quality healthcare to Pakistan’s thousands of flood victims who are suffering from a wide range of diseases.

Earlier this year, when Malaysia battled our own unprecedented floodings, Pakistan sent us aid during our time of need as well.

Those who are interested in lending support to Pakistan may reach out to GPM or other NGOs or charities.