Fajim Juffa Mustafa Kamal and Muhammad Din Fikri Zainal Abidin had just taken off before the two-seater Piper 28-161 light aircraft that they were in crashed on the road. 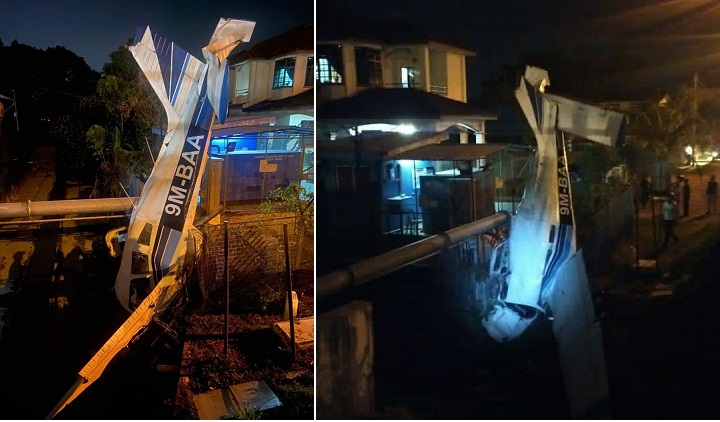 A mishap during a night-flying training exercise took the life of a 52-year-old pilot, Fajim Juffa Mustafa Kamal, who succumbed to his death after the light plane that he operated crashed on Jalan Dr Nazrin Shah-Sg Rokam, near Medan Gopeng at about 8pm last night.

His co-pilot and flight instructor, Muhammad Din Fikri Zainal Abidin, 62, survived the incident although he was reported to suffer serious injuries and is being treated at the Raja Permaisuri Bainun Hospital in Ipoh.

Perak police chief Datuk Mior Faridalathrash Wahid said that the police were alerted by the incident 10 minutes after the light aircraft – a Piper 28-161 light plane – had crashed.

A team from the Perak Fire and Rescue Department was subsequently rushed to the location and proceeded to remove the two victims from the mangled plane.

Transport Minister Datuk Seri Wee Ka Siong was quick to offer his condolences to the victim’s family after he was notified of the incident by the Civil Aviation Authority of Malaysia (CAAM) and the Air Accident Investigation Bureau (AAIB).

Wee also added that the authorities will carry out a thorough investigation as soon as possible.

“We hope and pray for strength for their families. The CAAM and AAIB under the Ministry of Transport will be investigating this incident in depth, in accordance with Part XXVI Civil Aviation Regulations 2016.

“It is very tragic for this incident to have occurred and we must do everything we can to ascertain the causes and ensure greater safety,” he wrote on his Facebook last night.

In another report by Free Malaysia Today, CAAM revealed that the Ipoh tower had received a mayday call from the aircraft at 8.07pm shortly after take-off.

The deceased was an experienced pilot

The deceased, who hails from Semenyih, Selangor was a former MiG-29 pilot with the air force and retired with the rank of lieutenant colonel.

It was also learnt that Fajim Juffa had survived a previous jet crash in 2005 – where he was left stuck on a tree for days due to engine trouble.

The light aircraft was operated by BATS Aviation Sdn Bhd, at its flight training centre based at Ipoh airport.