Referee Suhaizi Shukri spontaneously kicked in the direction of Selangor’s Fazly Mazlan who unintentionally stepped on his foot during the Selangor vs Sabah FA Cup quarter-final match last week. 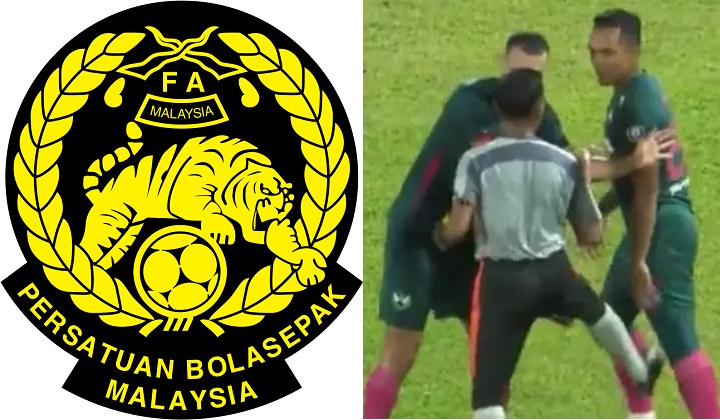 There will be no further action taken against referee Suhaizi Shukri following a kicking incident in last week’s FA Cup quarter-final match between Sabah and Selangor.

According to New Straits Times, The FA of Malaysia (FAM) cleared Suhaizi of any wrongdoing after it was clear that there is no ill intention from the referee when he appeared to be kicking in the direction of Selangor’s Fazly Mazlan.

Upon reviewing the video of the incident, it was found that no contact was made, which was confirmed by FAM referee committee chairman Datuk S. Sivasundaram.

According to the report, Suhaizi’s act was spontaneous as Fazly had stepped on his foot after protesting a yellow card decision following a foul on a Sabah’s player .

“Fazly was yellow-carded in the 45th minute for unsporting conduct. The player walked up to protest and accidentally stepped on the referee’s foot.

“The referee raised his leg towards the Selangor player’s leg, but it was unintentional. However, there was no physical contact.

“The referee did not reprimand Fazly for initially stepping on his foot as he felt it was unintentional,” FAM secretary-general Saifuddin Abu Bakar was quoted as saying by the English daily.

He also added that Suhaizi, 43, a Fifa-level referee, has a perfect record as he has never been punished for errors in matches.