Zang Toi first debuted the design in 2009 for his Spring collection and in 2020 at New York Fashion Week. 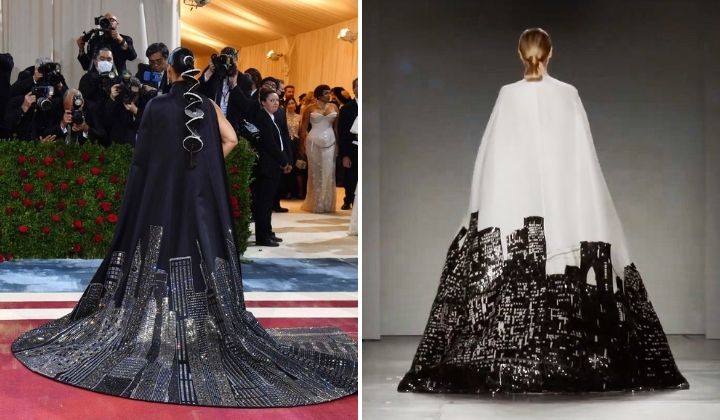 Most of the world watched in awe at the dresses shown during this year’s Met Gala. The dress that got the most attention and hype was none other than Blake Lively’s dress reveal.

However, eagle-eyed fashionistas spotted another dress at the Met Gala that they claim is a work of plagiarism.

Musician Alicia Keys donned a bejewelled cape showing off the New York City skyline that was designed by Ralph Lauren at the Met Gala.

Fashionistas immediately recognized that it was a rip-off of Malaysian designer Zang Toi’s New York floor-length silk cape that he debuted at the Autumn/ Winter show for New York Fashion Week in February 2020.

Zang Toi originally debuted the cape design in 2009 for his Spring collection, which was later worn by Malaysian model Ling Tan in 2010 at the CDFA Fashion Awards.

The cape was inspired by his love for his adopted home, New York City.

I came here 41 years ago with $300 to study at Parsons School of Design, and I wanted to show my love and appreciation for the city that embraced me — and allowed me to live the American Dream.

Ralph Lauren copied other designers before

According to New York Post, Zang Toi said it wasn’t the first time his designs have been plagiarized.

Netizens who recognized his design were aghast when they found out the cape worn by Alicia Keys wasn’t his creation.

Oh my gosh I can’t believe they did this! Just think they can change the colors and get away with it ! I haven’t supported them in a few years since I found out which way he votes and donates

Is It Illegal To Be Gay In Malaysia & Why Is This Lady Eating Nasi Lemak With Chopsticks?