The case is being investigated under Section 147 of the Penal Code for rioting. 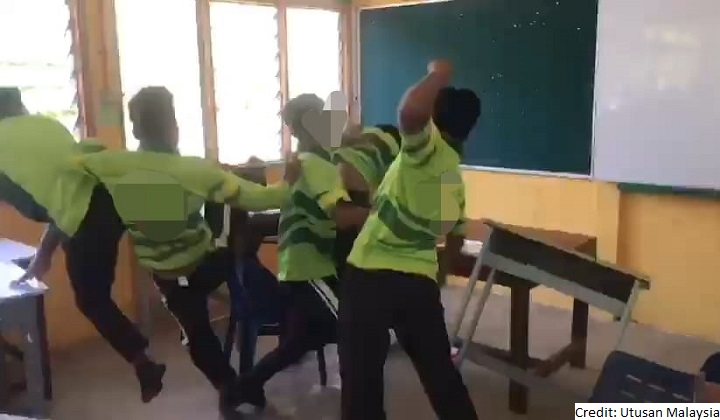 A form four Langkawi school student was violently trounced by his classmate, almost like a Royal Rumble match, in an incident that was recorded and had since made its round on social media.

In the 25-second clip, the student was seen being circled and confronted by his classmates.

After exchanging words with his confronters, the boy was suddenly kicked in the back before receiving a flying kick to his upper body area.

The boy then fell to the floor and was then heavily attacked by a group of other classmates.

He managed to regain his footing and swing his hand multiple times before he was brought down to the floor once again when one of his bullies threw a desk on top of him before the video ends.

Another video was also uploaded on social media purportedly showing the schoolboys being picked up by the police in a van.

According to Shariman, the incident happened on Wednesday at about 9am, adding that it was caused by a misunderstanding between the students.

The case is being investigated under Section 147 of the Penal Code for rioting.

Netizens condemned the schoolboys for ganging up to bully their classmate, while several netizens also applauded the victim for standing his ground against his bullies.