Another neighbour witnessed the act and has given statements to the police. 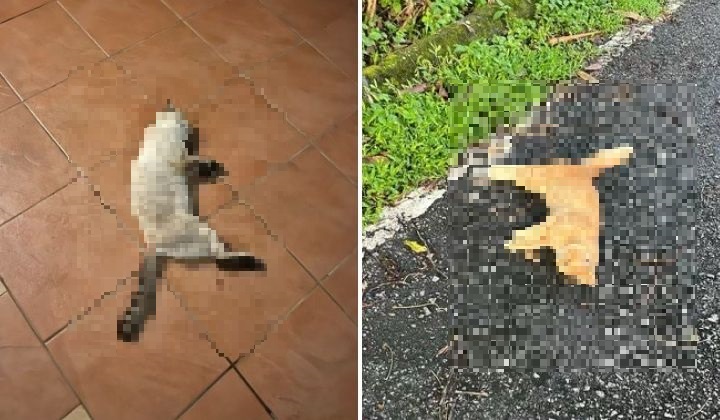 When the Malaysia-Singapore borders reopened, it helped reunite many families after they were separated from each other for two years.

However, it was not a happy end for a family in Aliff Puteri, Damansara Aliff in Johor, because someone poisoned their cats.

A Twitter user Fadzlee (@fadmanson) shared that a neighbour had no choice but to release some cats because they couldn’t feed the cats anymore.

Things were fine for the past two years until recently when all the cats were found poisoned and dead.

It’s believed that the Singaporean neighbour, who returned once borders reopened, was the culprit for poisoning the cats.

Fadzlee explained that a few years ago a similar incident happened and the Singaporean neighbour allegedly claimed that the cat disturbed their pet birds.

The cats were all doing fine when that neighbour returned to Singapore when Movement Control Order (MCO) was implemented. For the two years the neighbour was away, there were no cat poisoning incidents.

This changed once again when the borders reopened and the neighbour came back to Malaysia.

Netizens were sad and angry that the poor cats suffered at the hands of the neighbour. A few of them advised Fadzlee to lodge a police report.

According to Fadzlee, a report has been lodged and another neighbour who witnessed the poisoning has given their statement.

The Department of Veterinary Services also advised Fadzlee to lodge a complaint through its MyAnimalWelfare official portal.

A few netizens even asked Fadzlee to drop the address of the Singaporean neighbour. However, Fadzlee dare not do so in case of retaliation from the said neighbour.

It’s best to leave it up to the authorities instead of resorting to vigilantism.

Hopefully, the authorities will be able to settle the matter soon because animal cruelty is a criminal offence under the Animal Welfare Act 2015.

Animal cruelty is a criminal offence

According to SPCA Malaysia, animal abusers can be fined between RM20,000 to RM100,000 and a jail term of not more than 3 years or both under the Animal Welfare Act 2015 Part V Article 31: Cruelty to Animals.

Repeat offenders will be fined double the amount and face a minimum 3-month jail term.

READ MORE: How Malaysians Are Unknowingly Abusing Their Pets? Find Out If You Are Guilty