The masked thief swiftly opened the car door, got in and drove off without anyone stopping him. 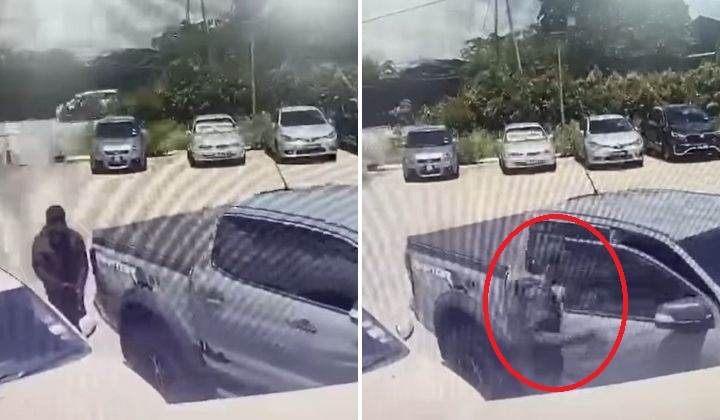 Many people are wary about the new way of doing things such as having digital door locks and car keys despite its cool and modern look. A recent incident showed that their worries are not to be taken lightly either.

A woman named Marina Liaw posted on Facebook with a plea for the public to look out for her brother-in-law’s grey Ford Raptor that was stolen on 10 March around 1pm in Bukit Kemuning, Shah Alam.

In the video, a masked man could be seen calmly walking up towards the parked grey Raptor while seemingly putting on gloves.

The masked thief has no problems opening the car door and quickly drove off in the vehicle without a hitch.

Marina Liaw clarified that they did lock the car doors but said the car uses a keyless entry system.

According to Angela, Marina’s sister and the victim’s wife, the keyless system might have been hacked and copied. She suspected that they had been targeted when they went to a carwash in Puchong a day before the incident.

That day, her husband kept seeing the same Vellfire and it had even stopped beside his car once. They saw the Vellfire again during lunch but Angela’s husband thought it was just a resident in the area.

When they reviewed the longer CCTV footage, they realised the thief exited from the same Vellfire.

The police told them that the group of thieves can hack into a car’s system and they’ve been investigating the thieves for a long time.

Netizens were shocked that the whole process only took a few seconds and pointed out that the thieves might be targeting Raptors.

Others questioned why the driver didn’t put on a steering lock.

In reply, Marina said her brother-in-law only parked for a while so he didn’t think to put on the steering lock.

They have lodged a police report and said they have important documents in the car. If you see the grey Raptor with the license plate VGP6033, please contact 03-5520 2222.

Hopefully, they’ll recover their stolen vehicle soon with help from the public.