The child was a victim, but then the mother became a victim too. 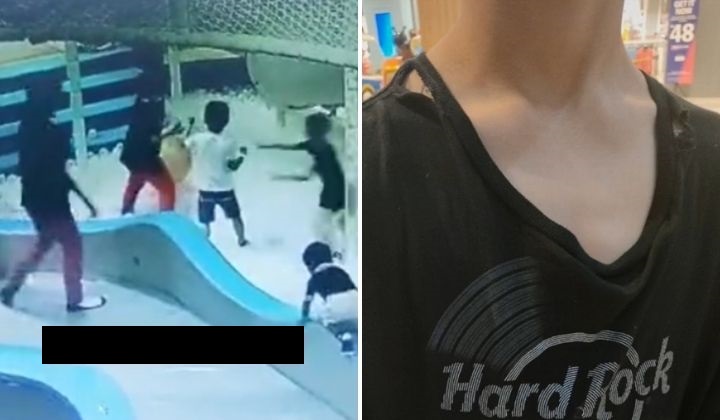 A video showing four children beating up another child went viral recently. The victim’s parents uploaded some of the videos online to explain what really happened that day.

Murni (@murniwanis) and her husband (@incikamad) brought their three children to Kiddytopia in AEON Nilai to play. It was supposed to be a fun day for the family but it ended on a sour note.

Murni said she was suddenly approached by a woman who claimed that Murni’s son (in white) hit her nephew (in black) until the clothes were all torn.

At first, Murni was really worried that her son did hit the other boy but she saw no injuries on the children.

The woman, who’s the boy’s aunt, then asked Murni to @murniwanis

Murni and her husband didn’t want to drag out the argument. Since they have to make a police report in order to view the CCTV, they agreed to settle and pay the woman compensation instead.

But that wasn’t the truth!

It turned out that the boy who got his black shirt torn was the bully all along. Murni’s son and a new friend turned out to be the victims in the playground fight.

After netizens advised her to fight for her child, she decided to finally lodge a police report and get the CCTV footage. What she saw broke her heart.

In the CCTV footage, her son in the white shirt was attacked by a group of four children in Hard Rock café shirts.

Since her son was on his own, he spun around with arms raised like a helicopter in an attempt to fight back and protect himself.

Another child in a red shirt tried to stand up for Murni’s son too but got pushed down the steps.

According to Murni’s husband, their son told them he befriended two other children in the play area before the incident took place. The child in the red shirt was one of the two new friends made.

When their son tried to get away, the other four kids followed him to the other side of the play area. They continued hitting and kicking her son.

Murni’s husband replied in the comments to say he was proud of his son for bravely telling the truth and never once shed a single tear throughout the whole ordeal.

However, he has no idea how his son got the idea to protect himself by spinning around with arms raised.

Murni said she hoped this will serve as a lesson to the other parents. Netizens who were unsatisfied with the outcome told Murni to get her money back from the other woman.

However, Murni clarified in another TikTok video that she does not want to continue investigating or seeking compensation from the bully’s aunt and would rather consider the issue resolved.

The other boy was praised for protecting his new friend

Netizens praised the child in a red shirt for defending his friend although they were just new friends.

They were also angry and couldn’t believe how the other woman had the audacity to ask for compensation when they were in the wrong.

Hopefully, the four children involved will be taught a lesson and not do this to another person again.