They were allegedly told by MBPJ to renew their licenses but met hurdles the whole way. 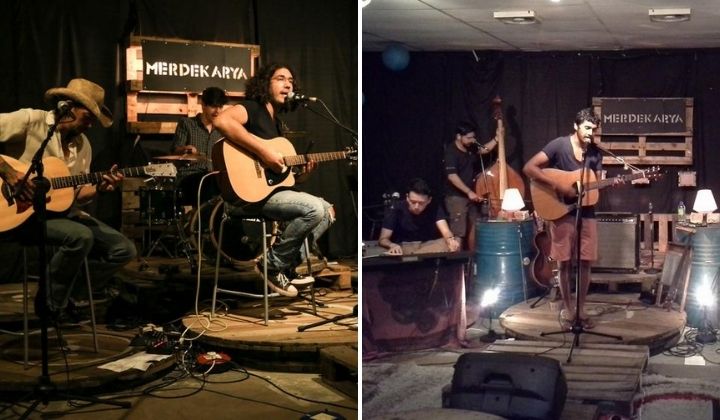 Merdekarya, both a restaurant and live music venue, has been giving local music artists and bands a platform. It regularly hosts open mic nights too.

However, its live music venue has allegedly been shut down indefinitely by Majlis Bandaraya Petaling Jaya (MBPJ) due to no fault of the venue.

As most of you know by now, The Live Bar has been shut down by MBPJ. Dono till when.

According to Merdekarya’s Twitter, they were raided by MBPJ sometime in December which was not unusual for the owners. This was because MBPJ has been their regular visitor for the past two years.

We’re quite fond of their enforcement officers and somewhere in the Multiverse we might actually be friends.

One of the officers informed that after two long agonizing years, they were finally renewing entertainment licenses again and Merdekarya could apply for its license renewal.

The venue owners happily said to the officers who laughed and went on their way.

With this information, Merdekarya applied to renew their license. On 28 December, they received a notice saying their license has been approved.

The license was on hold

However, the other shoe dropped when they received another notice on 13 January saying their license was on hold until MBPJ could get approval from the National Security Council (MKN).

Since there was nothing they could do, they decided to do what every other venue is doing. This means they could go with the live performance or indoor busking route, which they claim to be in accordance with MKN’s rules but it requires a letter of approval from MBPJ.

So Merdekarya did just that and sent a letter by hand to MBPJ. MBPJ didn’t know they were tasked to issue this letter but they said the officer in charge was on leave. They said to leave the letter with them and they’ll get back to Merdekarya.

A week later, MBPJ called to say they couldn’t issue the letter and the proper procedure to restart live music is to apply for a Temporary Permit that’s renewable every month.

Merdekarya decided to apply for that permit but after months of waiting, MBPJ said their permit was rejected on the grounds that busking inside the premise was not allowed.

The venue was raided again by MBPJ on Wednesday (16 February) and they asked to check the venue’s documentation which was standard routine.

The officer in charge asked if the performers onstage had individual permits to perform or busking permits. The officers weren’t sure about this as well because they said all performers need the permit but they didn’t know who issues it and where to get it.

These officers had no clue about the Temporary Permit either despite that it was their own licensing department that supposedly issues it.

The officers then said Merdekarya was the only venue holding live shows when others were not, to which the venue owners said it was pure rubbish. However, the venue owners kept quiet because they didn’t want to get others into trouble.

In the end, Merdekarya owners were supposedly told they could only operate with a renewed entertainment license which MBPJ wasn’t renewing and venues that get to renew their license were venues that have been continuously paying throughout the past two years.

The owners said it was completely false because MBPJ’s licensing department had put a hold on renewals.

After all that, MBPJ allowed Merdekarya to finish the shows but they couldn’t hold live music events from Thursday (17 February) onwards or they would be fined RM25k.

Where they stand now

Merdekarya said they’ll probably just wait until MKN completely lifts the current restrictions and ‘night clubs and pubs activities’ is no longer on the negative list.

Merdekarya apologised to those who have signed up to be members to enjoy free entry to live shows. Members could cancel their membership and resubmit when live music restarts.

To continue supporting the venue, guests could still enjoy discounted drinks at Bar B and The Balcony Bar. The Live Bar would still be open for larger group bookings.

The venue owners added that guests could support them by dropping by to eat and drink.

Have a beer (the ginger one), a tuak or langkau or two. Hossain’s just made a killer mango pickle that we’re trying out with our burgers (yes, on the burgers!) and it’s awesome.

The owners said they were fine and they had weathered worse storms.

Fans of Merdekarya were sad to see their favourite live music venue was given the runaround and had to temporarily close.

They wished the owners the best of luck and hope to return to the live music venue soon.

The Story Of Khadijah Cooke