The fake tigers were made to remind people to protect our Malayan tigers but they were not spared from harm either. 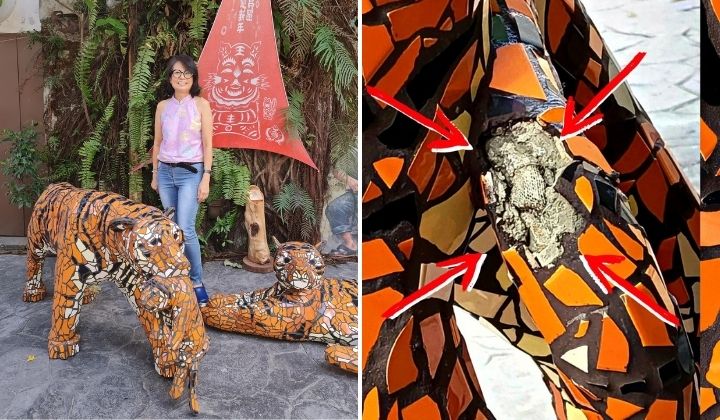 Malaysian artist Alice Chang Oi Lai’s sculptures, named The Malayan Tiger Family, were made to highlight the importance of saving the Malayan tiger.

It was proudly displayed at Kwai Chai Hong in Chinatown on 13 January, serving as a popular spot for photo opportunities too.

Sadly, the artworks which were supposed to educate the public about protecting tigers were harmed instead.

The tiger sculptures that were made from metal frames and metal mesh were quickly trampled on three occasions.

CCTV footage showed people damaging the art sculptures on 17 January, 20 January and 29 January by attempting to sit on the tigers, as reported by Malay Mail.

Our CCTV witnessed people trying to step on the tail to lift themselves up to ride on the sculpture.

Lai, as she’s fondly known by clients, was shocked when she found out what happened to her artworks.

Despite feeling sad, she met up with the Kwai Chai Hong team and they quickly decided to use their next step as a teaching experience.

Instead of repairing the sculptures, they decided to bandage the damaged areas to show the public how they harmed the tigers and how their irresponsible actions are irreversible on ‘fake’ tigers and public art too.

The team also made a natural and jungle-like barrier to protect the sculptures using fallen tree branches, rocks and stones.

Netizens lauded the team’s decision to turn a negative moment into a positive lesson.

They also surmised that it was the lack of education that was the cause of the art vandalism.

The netizens encouraged others to appreciate the public artwork and to learn from the experience too.

It’s not the first time

Incidents like these show that Malaysians still have a long way to go when it comes to appreciating art in public spaces due to the lack of awareness, opportunity and education.

Just this week, art murals along Kuantan Art Street were vandalized. The murals were defaced with drain holes drilled in and extra accessories added such as a skateboard.

The wooden table which was part of a kopitiam mural scene was broken too.

A tourist was also caught on CCTV for climbing on top of the bicycle installation that was part of the mural.