Locals in the area said the flooded drain at Jalan Kota Kecil has been a problem for some time. 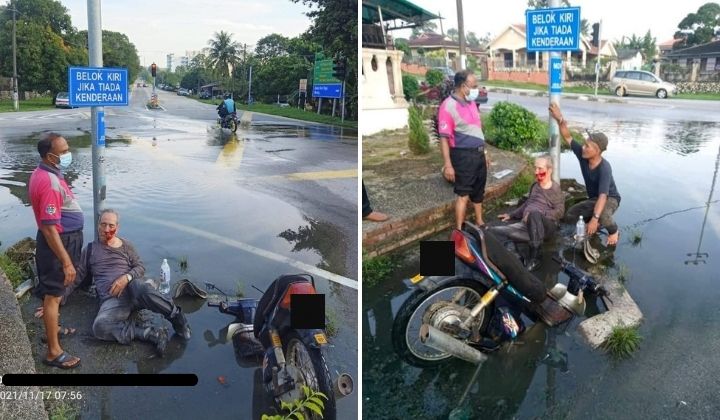 A photo showing an injured man on the ground by the roadside at Jalan Kota Kecil, Kota Tinggi recently went viral. Based on the timestamp on the photo, the road incident happened yesterday (17 November) around 8pm.

In the photo shared by Facebook user Abdullah Balan Therock, a motorcycle could be seen half-submerged inside a flooded drain on the road.

It’s believed that the poor man rode into the drain hole obscured by the big puddle of water.

Based on postings on the Facebook page Orang Kota-Tinggi, the admin has been posting about the flooded corner of the road for days before the man’s unfortunate accident.

Members of the group also chimed in to say the issue had been going on for a long time and nothing was done to fix it. Some prayed for the man’s speedy recovery too.

According to Kota Tinggi District Council (MDKT), the main reason that caused the flooding is due to a crack in one of the culvert pipes.

Coupled with the amount of rubbish, the drain was clogged and was unable to channel the excess water away.

However, some netizens found that the action taken was a little too late and let their dissatisfaction known.

A netizen griped that MDKT only decided to fix the old issue only after it has been viralled online.

A few netizens advised the family of the injured man to file a civil lawsuit.

Hopefully, the man did not suffer any serious injuries and will recover quickly.

[Watch] Driver In Crashed Car Accused Of Being Drunk, Turns Out He Had Brain Tremor

[Watch] Motorcyclist Dies After Crashing Into A Car In Temerloh, Driver Allegedly Made A Fast Turn Without Signalling