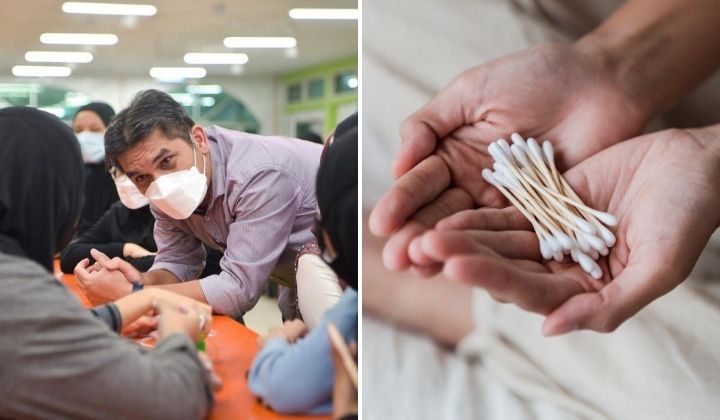 Former journalist Tashny Sukumaran shared a tip she received about an incident that happened on 18 October around 7.50pm.

The whistleblower and 30 other young women aged 18 to 19 in Kolej Vokasional ERT Setapak were rounded up for a ‘period check.’

These college students were each given cotton buds to ‘prove’ they were on their period. In the past, these ‘period checks’ had stopped for a while after the early furore this year.

However, the ‘period checks’ returned when someone performed their prayers alone instead of doing it in a group at the hostel surau.

When students pushed back against the practice, they were told “if you feel uncomfortable about it then perform your prayers.”

What’s shocking is that these ‘period checks’ have been taking place in the college for a long time.

Last week I received a message from a whistleblower who attends Kolej Vokasional ERT Setapak. On 18 Oct at around 7.50pm, she and about 30 other young women (aged 18-19) were rounded up, given cotton buds and asked to ‘prove’ that they were on their period.

According to Malay Mail, Education Minister Datuk Radzi Jidin has paid a visit to the college today to find out from the students firsthand what transpired and to get an explanation from the school’s administrators.

“I take this matter very seriously and am committed to end such practices in any of the ministries’ institutions if it is happening,” he wrote in a series of tweets on Twitter.

It seems that the college in question isn’t the only school with a period spot check policy. Radzi said he has a list of schools that allegedly carry out these intrusive checks.

In a report by Malay Mail, at least 15 schools are named in the list: six from Selangor, three from Johor, two from Terengganu, two from Kuala Lumpur and one each from Kedah and Pahang.

‘Period checks’ are intrusive and can be a source of stress and embarrassment to female students subjected to the practice.

This also brings the effort to #MakeSchoolASaferPlace for students, which was started by Ain Husniza, relevant and important. Ain has been invited to further speak about Children’s Rights at the upcoming Unicef conference.