Ain Husniza’s story exposed rape culture in schools and she’s continuing to champion for Children’s Rights at the Unicef Conference. 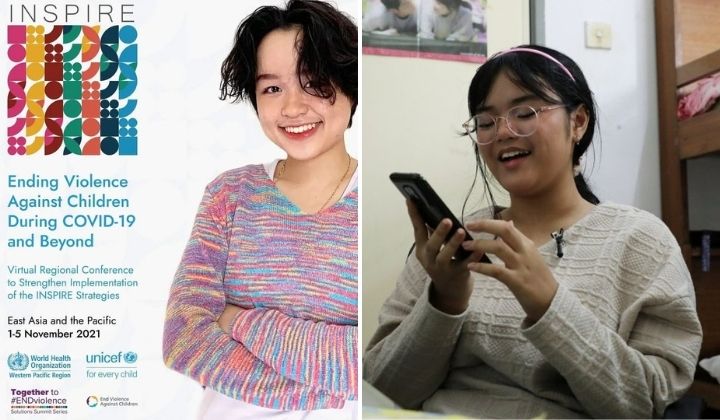 Ain Husniza Saiful Nizam, the schoolgirl who previously called out her physical education teacher for making a rape joke in class, has been selected to speak at Unicef East Asia and Pacific’s “Inspire” Conference. The conference is taking place online from 1 to 5 November 2021.

She’ll be speaking in a panel alongside Najat Maalla M’jid, the United Nations’ special representative of the secretary-general on violence against children.

The theme of the conference is about ending violence against children during Covid-19 and beyond. As such, Ain’s participation in the conference involves giving insights and suggestions on the current situation of children’s rights in Malaysia.

In late April this year, Ain posted a Tiktok video that exposed the rape jokes made by her male physical education teacher.

The teacher explained there were many laws protecting sexual abuse against minors and proceeded to inform students of a ‘loophole.’ According to the teacher, the ‘loophole’ is to “rape girls when they are older than 18, not the ones younger than 18.”

When Ain reached out to a counselling teacher for help, her worries were completely dismissed. To add salt to the wound, the counsellor tried to rationalize away the teacher’s unacceptable behaviour.

Since her video went viral, she has been subjected to backlash from adults who are supposed to keep children safe. Ain had to contend with the online backlash, including rape threats, from netizens too.

Another schoolteacher attempted to discredit Ain’s experience by claiming that Ain is autistic.

When Ain skipped a few days of school after receiving a rape threat from a schoolmate, she was issued a warning of expulsion letter from her school.

Despite the numerous backlash and threats, Ain quickly garnered support from other female students and her Twitter hashtag #MakeSchoolASaferPlace trended.

Students who supported her came forward with their own stories of sexual harassment, proving that Ain’s experience wasn’t an isolated issue and that it’s experienced by female students nationwide.

The hashtag #MakeSchoolASaferPlace became one of the top ten trending topics in the country on Twitter with celebrities sharing their experiences as well.

In August, Ain was slapped with a RM1 million defamation lawsuit by the teacher accused of making rape jokes in class. Ain’s parents later filed a RM5 million countersuit for causing emotional distress.

Ain’s big exposé revealed that there are still a lot of people who do not understand the seriousness of rape culture.

Nevertheless, the #MakeSchoolASaferPlace movement has provided a public avenue to speak up against sexual harassment and raise awareness about the dangers of rape culture in Malaysia.

Ain’s courage to speak out and her movement has inspired other teachers to do better for their students and to speak out about the deep-seated issue too.

Stephen Isaac, a teacher in an all-boys school SMK(L) Methodist Kuala Lumpur, was inspired to redesign his lesson plan to address rape culture and sexual harassment in schools.

Ain’s experience and the momentum behind #MakeSchoolASaferPlace have also spurred a few politicians to put pressure on the Ministry of Education to look into Ain’s issue.