The Federal Government STILL does not want to allow mothers to confer citizenship even though the KL High Court ruled it sexist. 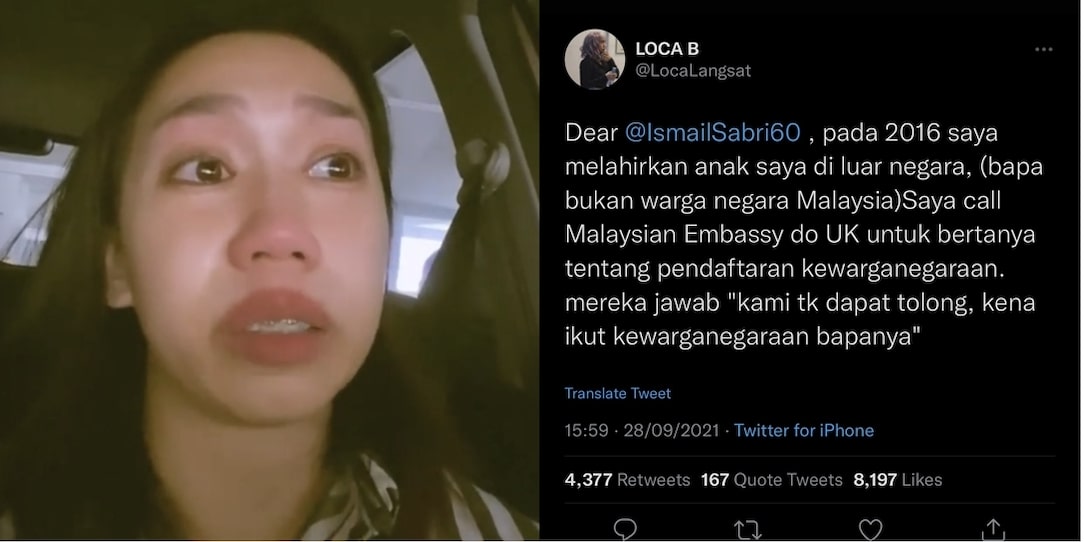 A Malaysian mother was left in tears when the child she carried for 9 months failed to gain citizenship status even after two years of battling with the country’s law.

“It shouldn’t be this hard for my son to be with me in this country”, said the celebrity who only wanted the best for her child.

Yusuf was born in the United Kingdom (UK) and his father isn’t a Malaysian citizen, so his mother’s application for him to be registered as a citizen of this country was denied.

However, Loca and her British husband divorced. She later remarried a local man.

The mother openly says that we live in a country where the government discriminates against women and makes a plea to Prime Minister Datuk Seri Ismail Sabri Yaakob to rectify this distressful fact.

She implies that thousands of other Malaysian mothers like her are in a state of limbo because of this discrimination.

See according to the law, unlike Malaysian men, women aren’t allowed to pass down their citizenship to their children who were born overseas as it is seen as a threat to national security.

But recently, the Kuala Lumpur High Court ruled that kids born to Malaysian mothers married to foreigners can have the right to grant citizenship to their children born abroad and declared the law to be discriminatory.

However, this decision is now being challenged by the Federal Government.

Former Deputy Dewan Rakyat Speaker and Pengerang Member of Parliament (MP) Datuk Seri Azalina Othman Said even spoke up about the issue in front of the Dewan today (29 September) and criticized the government for the move.

She implied that the law was clearly unfair and we have nothing to lose from changing the rules.

If automatic citizenship isn’t allowed for Malaysian women for their overseas-born children, then the same should be applied to men too. It is as though women in this country are in some ways lesser than men.