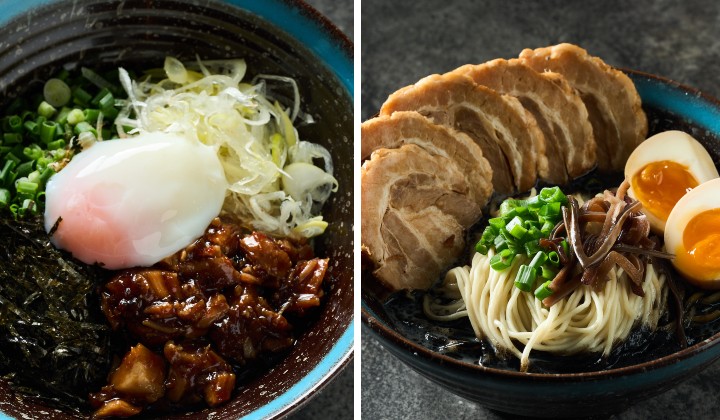 Ramen Mob is perhaps the most “civilised” among the Japanese restaurants in the city, where you are expected to make loud slurping noises while you eat.

Tucked away in the hustle and bustle of Taman Desa, Ramen Mob feels like an uptown hideaway with its elevator-like entrance.

Walking into Ramen Mob, you will notice how the restaurant has created an ambience inspired by modern and traditional Japanese design, with spatial warmth that characteristic lighting techniques have to offer.

The kitchen is in the centre of the restaurant, signifying to diners that the food preparation space and the dining area are kept exceptionally clean.

Its expansive menu covers various popular styles of ramen, such as miso, shio, shoyu, and tonkatsu.

Each guest fills out their online menu detailing how they want the ramen prepared.

Because Ramen Mob is known for their delicious tonkotsu ramen, diners usually opt for it to experience all the lusciousness that goes into it.

Tonkotsu, which means “pig bone”, is made by boiling pork meat and bones together,

At Ramen Mob, they go the distance to boil a thick and hearty broth with a meaty flavour.

The result is creaminess and milkiness with a layer of richness and bursts of umami with each spoonful.

Ramen Mob does a beautiful job recommending how to order your ramen for the perfect balance of flavours and spices for those unfamiliar with ramen.

Once you select your ramen preferences, there is a button on the menu that you can press, which will notify the chef to labour away diligently to prepare the delectable culinary creations.

And because timing is one of the critical elements to a fantastic tonkotsu experience, the chefs at Ramen Mob are swift in delivering your food.

The beautiful layer of spice and heat from the sauce matches perfectly with the savouriness of the broth and vegetables.

The long and tender noodles also provide a good amount of starch that balances the spice while absorbing the flavour from the broth.

At the same time, sliced pork (chashu) delivers additional savoury notes and breaks up each bite, so you’re getting more than a spoonful of broth paired with the noodles.

Before you face down the ramen, the appetizers may call your name, such as delightful little bites of edamame (edible soybeans).

We can attest that Ramen Mob is one of the best ramen restaurants in the city and is a must-have.

If upwards of RM30 per person seems a fair price for the excellent ingredients at Ramen Mob, the conviction only grows once you start eating.