With the Celcom Spin-to-Score contest, subscribers stand a chance to win some gila best prizes! 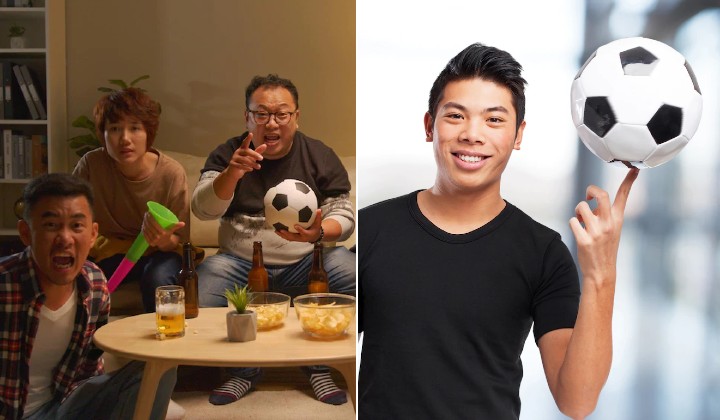 It’s bola season! As 32 nations slug it out in a total of 64 matches at the FIFA World Cup Qatar 2022, Malaysian football fans are gearing up and going cuckoo with football fever.

Even though our own national team has sadly never qualified for the momentous event that happens once every four years, that has never stopped everyone from getting together and doing some crazy things in support of the sport and teams they adore.

So let us quickly examine some of the most insane things Malaysian bola fans are more than willing to do to scratch their football itch over the next month:

With a five-hour time difference between Malaysia and Qatar, there’s bound to be a whole lot of sleepless nights for football fans of all ages who’d be taking up residence in front of their home TV screens, their favourite bars and mamak stalls, or even having a picnic outdoors just to watch the games.

So don’t be afraid if you see a few panda-eyed zombies walking around the office or classrooms during the daytime. They’re not undead, they just have a heavy coat of Messi-car-a on…

Football fans gamble with more than just money, they have their reputations at stake! The World Cup is the one time you’ll get to see some insane wagers being put up by fans in support of their favourite teams — from pledging to go bald if their team doesn’t score the winning goal to staking their time on finishing that proposal or project on their own if their team loses.

But don’t get too serious about it, everything is done just for the fun rivalry of it all!

If festive seasons here in Malaysia are when we get to see people dressed up in colourful traditional attire, then football season is the one occasion where we’ll see fans strutting in their latest gear in support of their treasured teams.

And sometimes, you also get to see a mix of football merchandise that should never see the light of day…

Did you know that Malaysian football fans are some of the best debaters in the world? No matter what you might think you know, there’s always some point of argument that they’ll bring to the table to defend why their team might be on the short end of the stick.

Missed a goal? The wind was blowing in the wrong direction…

Player gets a yellow or red card? The referee must be rabun…

There’s no winning an argument when we have these professional football commentators ready to kick around the discussion.

But hey! If you are looking to score a win during this crazy season, then Celcom is here for you!

Celcom’s Gila-Gila Bola celebration is here to reward you with some insane prizes when you sign up, top up or pay your bills from now to 31 December.

Become a Celcom Prepaid, Postpaid or Home plan subscriber now and earn a chance to spin the wheel and score your prizes on the Celcom Life app.

So what are you waiting for? Take part in the Celcom Bolaverse today!