Haunted properties usually don’t sell for much but some would still splurge for it. 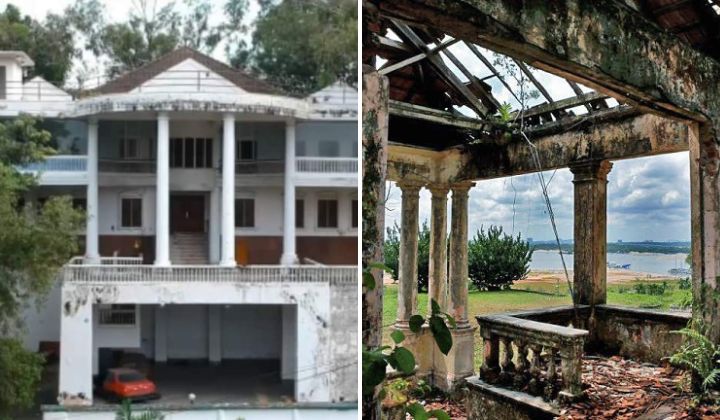 The most famous ‘haunted mansion’, the SG House, in Bukit Gasing is reportedly being auctioned off with a starting bid of RM4.4 million.

The Selangor Auction Property, a commercial property agent, made the announcement on Facebook saying the auction will take place on Tuesday, 13 December.

The high value of a haunted property tickled some netizens who jokingly alluded that it was expensive because it was ‘fully furnished’ with many unseen inhabitants.

Why is SG House haunted? The mansion is believed to have been abandoned in the early 2000s after a tragic accident.

A wealthy businessman, Sanjay Gill (SG is his initial and it’s emblazoned right at the front gate) bought the luxurious property to live with his wife.

However, his life as a businessman meant that he was often not at home. His wife thought nothing about it until she found out he has a mistress.

His wife then allegedly murdered the mistress in cold blood and hung the decapitated head on the house’s front door.

When Sanjay came back home to the gruesome scene, he collapsed to the floor due to a heart attack and died. His wife followed him soon after by suicide out of guilt.

Whether or not the story is true, it’s still a wonder to many how a ‘haunted’ property could fetch a high price.

Here are some haunted houses that are or should be worth quite a lot of money.

Villa Nabila is a dilapidated bungalow near Danga Bay in Johor Baru and was listed as one of the top five haunted houses in the country by US-based travel portal Expedia.

The already creepy-looking house was made scarier when a 16-year-old Malaysian boy allegedly disappeared after entering the villa.

Fortunately, it seemed to be just a story because the same boy was found. He actually slept over at a girlfriend’s house the night he supposedly vanished into thin air.

According to The Star, the villa belonged to a Singaporean named Low Sue Heng and the property was bought in 2008 for more than RM18,000 in quit rent.

These days, the villa functions as a shelter for dogs under the care of the Companion Animal Rescue Effort Society (Cares).

The founder and chairman of Cares, Joseph Chia, converted the mansion into a shelter for strays in 2017 after getting permission from Low.

Did the dogs detect any ghosts? Joseph said he didn’t experience anything supernatural but sometimes the dogs will avoid certain areas and bark at the bathroom on the lower floor.

Kellie’s Castle in Ipoh, Perak, is said to be haunted by the untimely passing of its owner. Scotsman William Kellie Smith decided to build the most opulent home in Malaya to spite others who have once doubted his wealth.

Long story short, he spent a lot of his wife’s inheritance to build the home but it was never completed. This is because he died in Lisbon in 1926 due to pneumonia while collecting the lift meant to be installed in his home.

His heartbroken wife sold it to a UK-based trading company Harrisons and Crosfields, who decided not to invest much into the half-completed property they referred to as ‘Kellie’s Folly’ and left it to rot.

Years later, the building was turned into a tourist attraction. It’s not known what is the property’s worth today but The Star reported that the Tourism Ministry allocated a cool RM5 million to upgrade the place in 2011.

Bukit Tunku or Kenny Hills is known for its luxury bungalows and lavish condominiums.

With the area also being known as the Beverly Hills of Malaysia, the property value of the haunted house in the area should be quite high too.

The house got its horror badge of honour due to the various bad things that happened to its occupants. Some said a woman of a wealthy family committed suicide in one of the bedrooms.

After that incident, the house was allegedly abandoned and left to rot. The building eventually gained more horror stories from those who were spooked by the dilapidated state of the building.

One story alleged that the ghost of a dead motorcyclist could still be heard riding at high speeds in the area and then disappearing into the darkness. #RempitForever

The 99-Door Mansion, also known as the Caledonia House in Nibong Tebal, Penang, was originally built by the Ramsdens, a wealthy British family with rumoured links to the East India Company in the 1840s.

Other rumours suggest that the whole family was slaughtered by Communist guerrillas or Imperial Japanese troops in the Second World War.

Another chilling story alluded that the young scion of the family, John St. Maur Ramsden, was shot in the head twice and his corpse was left on the steps of the mansion.

Nevertheless, the house with many doors gave rise to supernatural stories about the disappearing 100th door which will reveal itself on inauspicious days.

Years later, the ownership of the property fell to Ng Swee Ching, a former Bukit Tambun assemblyman, and then to an unknown party from Perak in the 1970s.

Star Property reported that plans to declare the mansion a heritage site have been stalled because the current owner has not been found.

According to My Penang, S.J. Lee owns the Byram Estate where the abandoned house is located and is managed by caretaker S. Muniamah.

Why Are House Prices So Expensive? [Opinion]