This creepy theme park keeps its popularity after nearly 40 years. 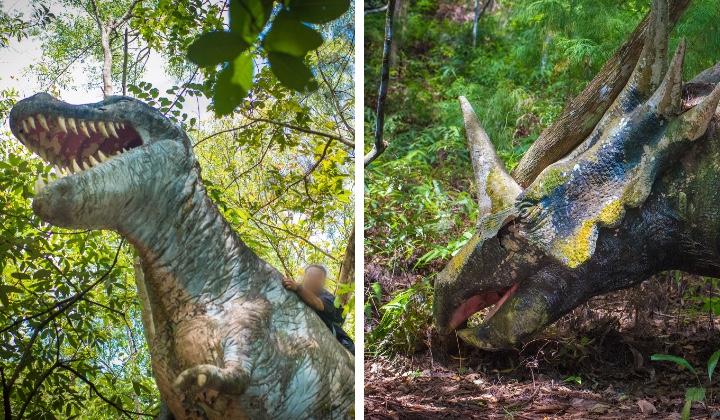 Hidden serenely in Gombak near the Karak Highway, Mimaland is a trend among adventure seekers who also use the place for financial gain.

Among them is Eddy (not his real name). He enters Mimaland by bypassing a security guard post at the park’s rundown main gate.

It’s easy to trespass into Mimaland as located on a hilltop and surrounded by forest, said Eddy.

Speaking to the Rakyat Post, he acknowledged that his forays are illegal, as the land is privately-owned.

Eddy charges visitors RM10 each for an ‘organized’ visit to Mimaland.

His customers, solicited from social media, are youngsters attracted to rusted attractions that have been left unchecked.

The atmosphere at Mimaland, which is mystifying after falling into decay, allows them to stretch their imagination, with spine-chilling tales thrown in for good measure.

The activity stopped for some time due to the Covid-19 pandemic.

Now that things are slowly back to normal, he hopes to bring sightseers again.

At the same time, he stressed that visitors themselves are responsible for any injury they may suffer during the tour.

Once Upon A Time Not Far Away

Indeed many do not know about this theme park, especially those who live outside the Klang Valley.

The current generation certainly does not have the opportunity to visit this park (legally, that is).

Mimaland (an abbreviation for Malaysia In Miniature Land) was built in 1971 on a 300 -acre hilly land in Ulu Gombak, less than 30 kilometers from Kuala Lumpur.

It was built by Malaysia Lakes Sdn Bhd in phases and opened to the public for the first time in 1975.

The ticket price was RM2 for adults and RM1 for children.

A total of 24 motels and five chalets equipped with swimming pools were completed in the first phase.

In the first three years, it recorded about half a million visitors who were primarily drawn to its prehistoric animals.

The theme park is filled with giant statues of dinosaurs, including the much-feared Tyrannosaurus and the herbivorous Triceratops.

In an age before the movie Jurassic Park – which gave the world the most realistic depictions possible – these plastic molded prehistoric creatures were a fascination for the public.

Besides the prehistoric animals, there was also a mini zoo orchid farm, a flower garden, a playground, a crocodile farm, a rubber estate, and a handicraft center.

Before There Was Sunway Lagoon

The pool was said to be the largest in Southeast Asia at the time.

Not only that, it featured a giant water slide, making this new attraction a favorite among visitors.

Other attractions include a lake that offers boating and fishing activities, a giant maze, and jungle trekking.

Unfortunately, it closed after 19 years of operation due to a landslide incident that endangered visitors.

No Happily Ever After

Mimaland reportedly fell into a state of disrepair after the first three years.

But the downhill gained momentum in January 1993 following an unfortunate incident that gave a bad reputation to Mimaland.

Singapore media The New Paper reported that Sivaraj Rajendran, a 27-year-old technician, suffered a broken collarbone after trying a ‘torpedo’ stunt and was lying paralyzed in a Kuala Lumpur hospital.

Contrary to widely held beliefs, he survived but the damage to Mimaland was done.

This incident has shocked the public and forced Mimaland to temporarily close the location so that improvement could be carried out.

Accordingly, an accidental death did happen at Mimaland, but way earlier in 1977. It was said that a 24-year-old businessman, Voon Swee Fah, drowned in the Mimaland pool.

After the renovations were done, it was reopened to the public. But it was not long before tragedy struck again.

In May 1994, a landslide damaged the walls of the same pool.

The landslide caused muddy water to fill the pool, which caused it to be closed to visitors.

Following these incidents, various parties, including government agencies, took the management of Mimaland to court over several allegations, including the lack of safety measures and land misuse.

The Nail In The Coffin

The court ordered Mimaland not to continue operations while the cases were being heard.

Not allowed to operate, Mimaland could not survive and was finally forced to close permanently in 1994.

Because it has been idle for so long, the place is said to be haunted and is touted as one of the scariest places in Malaysia.

A guard working there claimed that Mimaland was closed to make way for a golf course & condominium project.

He said the project did not pull through, and so Mimaland continues to be abandoned until now.

READ MORE: If you are keen to explore more creepy places, check these out.

DISCLAIMER: Trespassing is a criminal offence in Malaysia. If you plan to visit any of the sites below, please obtain prior approval from the landowners and/or authorities, and do so at your own risk.