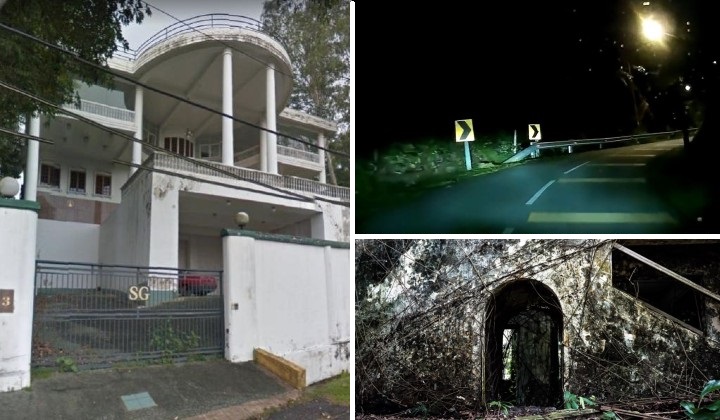 Dark tourism is on the rise thanks to its popularity in mainstream media, coupled with humanity’s innate characteristic of being curious.

And with October sometimes coined as ‘Spooktober’, coupled with the government easing up on domestic travel, ‘tis the season to satisfy the curious with some of Klang Valley’s most notorious sites.

It’s not so much visiting the actual place, but rather the stories behind them that make it so intriguing.

DISCLAIMER: Trespassing is a criminal offence in Malaysia. If you plan to visit any of the sites below, please obtain prior approval from the landowners and/or authorities, and do so at your own risk.

Before Sunway Lagoon, the place to go for all your amusement park thrills was Mimaland, a recreational water theme park in Gombak that opened in 1975.

Unfortunately, it closed down in 1994 after a series of unfortunate events including the death of a Singaporean using the giant slide at the pool, and a landslide that damaged the same pool.

Although the park has been closed for decades, people still visit to capture photos of the forgotten relics and to just experience the forgotten site that once pulled countless visitors from all over the country to the quiet village of Kampung Batu 12 in Ulu Gombak, Selangor.

Abandoned houses are frequent to come by, but one with an Alfa Romeo and Porche parked out front are rare.

Located at No. 3 Jalan 5/64, Bukit Gasing in Petaling Jaya sits an abandoned bungalow with a big ‘SG’ on its front gate.

The origins behind why the house is abandoned remains a mystery and undeniably also adds to the intrigue.

It is said the owner’s wife killed the owner’s mistress after finding out about her husband’s affair. The husband was then said to have died of a heart attack when he found out, which then lead to the wife hanging herself.

There is also another story of a spiritual black magic guru who practised the occult at the premises.

Like most abandoned homes, it’s not really “abandoned” per se as squatters and supernatural thrill-seekers are said to frequently visit and in the past.

Some things that have purportedly been found include reading material in relation to Christian mysticism referred to as the Traditional Martinist Order, Magic: The Gathering playing cards, ranking belts and certificates in the martial arts and other various documents that may have belonged to its previous owner.

If you were around in the 90s, headline news in 1992 was of two expat children and their maid who were gruesomely murdered by the security guard where the family lived on Jalan Turi in Bangsar.

The security guard was arrested, investigated, found guilty and then sentenced to death. He was said to suffer from a mental disorder.

Before the house was demolished, visitors claimed to have seen the spirits of both children standing at the main gate.

Even after the demolition, curious visitors still came around and some claimed it was littered with belongings of the former occupants.

Lisa (not her real name), a classmate of one of the victims, recalls of the unsettling time when one of the teachers told everyone the news of the tragedy.

We were all in disbelief. When you’re that age, you are not prepared to hear that one of your classmates had died.

“Lisa”, former classmate of one of the Jalan Turi victims to TRP

Hearing the story still gives goosebumps till this day. And the popular belief you get goosebumps when spirits are near makes the whole incident that more disturbing.

Home to the Malaysian elite, Bukit Tunku is an upper-class residential area in Kuala Lumpur that hosts many luxury condos and bungalows.

While the average cost to buy a home in this area is scarily high, the story of Kenny Hills is eerily chilling too.

Of its biggest haunts is the British colonial mansion where a woman is said to have committed suicide and her spirit still haunts the grounds till this day that even passing the area isn’t safe.

According to Amy’s Crypt, a website that investigates the world’s most haunted places, Bukit Tunku remains no stranger to reported paranormal phenomena with legends of a phantom motorcyclist haunting the area.

There have apparently been reports of said motorcyclist zooming past at high speeds, only to disappear into the darkness.

And then just a few years ago in 2017, a ghostly-like figure was caught on a drivers dash cam sitting in the middle of the road – so scary that it even made news around the world.