Malaysia Day was established in 1963 but was only considered a national public holiday from 2010. 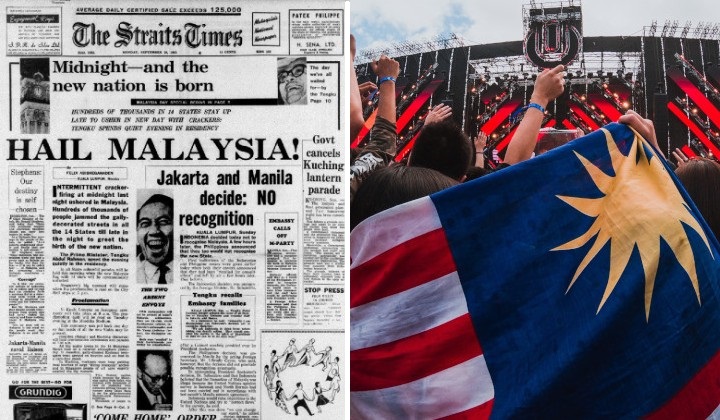 With a little over two weeks apart in celebrations, Merdeka on 31 August and Malaysia Day on 16 September is sometimes confused or interchanged with each other to be the same thing.

Merdeka (National Day) is on 31 August and marks Malaya’s independence from the British in 1957.

Malaysia Day, however, was established on 16 September 1963 when the former British colony of Singapore and the East Malaysian states of Sabah and Sarawak joined the Federation of Malaya to create the Malaysian Federation.

In retrospect – one celebrates independence, while the other revels in the union. Both however are important to what Malaysia is known as today.

But if they were both so important, why was Malaysia Day only recognised as a public holiday 11 years ago?

On 19 October 2009, then Prime Minister Datuk Seri Najib Razak declared that beginning next year, Malaysia day would be declared a public holiday.

He said the day would involve activities that would foster the 1Malaysia spirit.

According to Najib, National Day on 31 August would celebrate formal events such as parades to commemorate the historical moment, and as a reminder about the struggle in achieving independence from the colonists.

Malaysia Day, on the other hand, would be celebrated with events that would foster closer unity, understanding between the different races and community success and achievement through sports, social culture and arts.

By making Malaysia Day a public holiday,  he wanted the “joy and sorrows” of the people in Sabah and Sarawak to be felt by the people in the Peninsula.

Malaysia Day would have been on 1 June

The planned date for the formation of the federation was meant to be on 1 June 1963. It was then postponed to coincide with the sixth anniversary of Merdeka on 31 August.

The further postponement was made when Sukarno, the Indonesian president at the time, challenged the Malaysia plan.

To give the United Nations time to determine if Malaysia was being formed against the will of the Borneo people, Malaysia’s first Prime Minister, Tunku Abdul Rahman, agreed to postpone Malaysia Day till September 16, 1963.

There’s more than meets the eye on 16 September

On the same day in 1963, ironically when Malaysia became a federation, the two landmasses decided to have different time zones with peninsular Malaysia keeping to GMT +-7:30 while Sabah and Sarawak went 30 minutes ahead to GMT +08:00

Read More: Why Malaysia And Thailand Don’t Share The Same Time Zone When They Technically Should

Coincidentally, 16 September is also Malaysian Armed Forces Day (Hari Angkatan Tentera Malaysia) which was established 30 years prior in 1933, back during the British colonial era.

Did you know there was also a song written about Malaysia Day?

Malaysia Forever was a song composed by Canadian Bobby Gimby to celebrate the formation of the Malaysian Federation.

Nicknamed “The Pied Piper of Canada”, Gimby was working as a songwriter and also worked for an advertising agency, writing jingles for commercials.

While in Singapore on business in 1962, he began to write the song.

The song was recorded in Kuala Lumpur and Singapore and was sung by the Choir of the Marymount Vocational School (Singapore).

The song became very popular, spurred by frequent radio play, and was even considered as Malaysia’s ‘unofficial national anthem’.