Many countries use the easternmost point as its reference to set a time zone and because of practicality, we are actually on Sabah time. 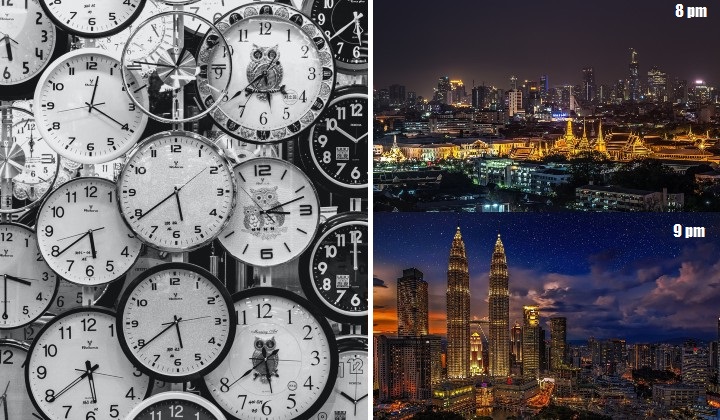 While we could easily cross borders physically to parts of Thailand from our neighbouring states like Perlis, Kedah, Perak and Kelantan, the moment you cross, clocks are set an hour behind.

How is it that some places that are so close geographically, follow a different time zone?

If we are purely basing time zones on where a place lies longitudinally, Malaysia should fall within the GMT +7:00 time zone.

Why it doesn’t, dates back to history and if you have the time, we’ve got the reason.

It all goes back 120 years ago in 1901 when Malaysia (and Singapore) was known as the Federated Malay States and Straits Settlements adopted British Malayan Mean Time, which was based on Singapore Mean Time (GMT +6:55).

The reason for the change was to schedule issues that arose from the increase of rail, postal and telegraph links between Britain’s various colonial possessions on the Malay peninsula.

On the day when Malaya, North Borneo(Sabah), Sarawak, and Singapore became the Malaysian federation on 16 September 1963, the two landmasses once again had different time zones with peninsular Malaysia keeping to GMT +07:30 while Sabah and Sarawak went 30 minutes ahead to GMT +08:00.

And then it was one (time) again

As a post by Quora user Zi Jian Yow puts it, this was obviously a headache for Malaysian government agencies and businesses so when Tun Dr Mahathir Mohamad became Prime Minister in 1981, he suggested that Peninsular Malaysia turn their clocks 30 minutes forward to UTC +08:00 to join Sabah and Sarawak.

The time change would also align Malaysia’s timezone with Greater China – a boon for the stock market and the business community.

Even though Singapore left the federation in 1965, their Prime Minister at the time Lee Kuan Yew agreed with the time change and followed suit.

On 31 December 1981 at 11:30 pm, everyone in Peninsular Malaysia and Singapore turned their clocks to midnight (UTC +08:00) and welcomed the New Year half an hour early.

And that my friends are the reasons why it’s 4 pm here in Malaysia (at time of writing) and not 3 pm like it is in Thailand and other neighbouring countries that share the same longitudinal line that constitutes a time zone.