Each type of flower in the bouquet was grown in Japan’s prefectures most affected by the 2011 earthquake and tsunami. 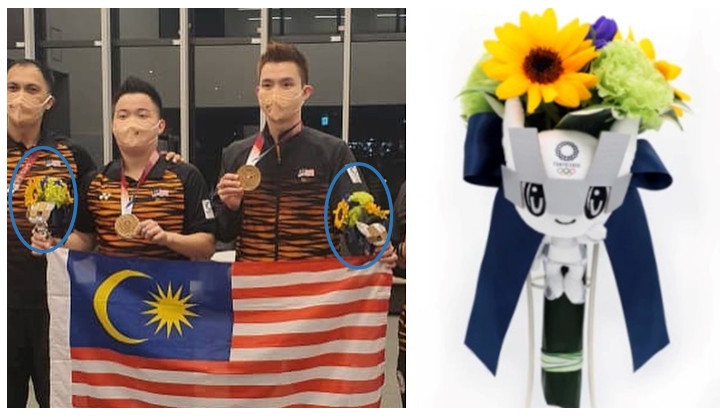 As we beamed proudly together with Malaysia’s Badminton Men’s Doubles team medallists Aaron Chia and Soh Wooi Yik, all eyes were on the glorious medals around their neck and happiness in the form of a smize (smiling with your eyes) on their mask-protected faces. But did you also notice the small bouquet they were holding?

There’s a special significance to those ceremonial blooms.

A symbol of Japan rising from devastating tragedies

The bouquet presented to medallists at the Olympics are made of sunflowers, Eustomas and gentians, with Tokyo’s Olympic Games mascot Miraitowa completing the arrangement.

Each type of flower represents Japan’s prefectures of Iwate, Fukushima and Miyagi, where 20,000 people died or went missing in the catastrophic 2011 earthquake and subsequent tsunami that affected those prefectures significantly.

Of the flowers, the most predominant in the arrangement would be the bright yellow sunflowers.

Olympic organisers say that in the wake of the tsunami where more than 10,000 people were killed or are missing, parents came back to a hillside in Miyagi to plant sunflowers in memory of their children who died.

Sunflowers however were new to the area. This required flower cultivators to develop a technology that would produce small sunflowers to fit within the small bouquets.

Meanwhile in the Fukushima Prefecture, the 2011 tsunami triggered a meltdown of three reactors forcing many residents to evacuate which also damaged agriculture production.

Although Fukushima was an unlikely place to grow flowers, a non-profit initiative was set up to cultivate the green and frilly Eustomas in an effort to jump-start the economy and to help with the recovery effort.

The bright flue flower you’ll see in the Olympic bouquets are gentians, grown in Iwate which is a coastal area that was also greatly affected by the 2011 disaster.

Unlike sunflowers and Eustomas that are not native to Miyagi and Fukushima, gentians have been growing in Iwate since at least the 1960s.

To represent the Olympics being in Tokyo, green Aspidistras which are grown in the host city were also included in the bouquet.

Topping it off is Tokyo’s Olympic Games mascot Miraitowa – a cartoon figure with the blue and white chequered helmet whose name is a combination of the Japanese words mirai (future) and towa (eternity).

Miraitowa represents Tokyo 2020 Olympic Games’ vision to ‘lead to a future of everlasting hope in the hearts of everyone around the world’.