“Actually I do this for my daughter. To inspire her to be positive, to be healthy.” 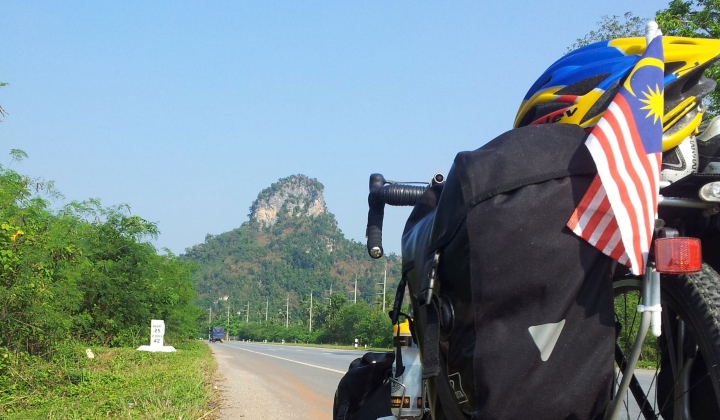 Choosing auspicious dates for departure and arrival, he left Kuala Lumpur on his bicycle on Valentine’s Day 2012. Jacky Hong recounts his harrowing journey through 16 countries arriving before the 2012 London Olympics’ opening ceremony in July, after 18,000km.

Equipped with 60kgs of provisions for his trip, the journey took about 6 months to complete. Cycling through northern peninsular Malaysia, he then crossed Thailand and Laos and moved on to China which took  about 2 months traverse.

Jacky headed west through Kazakhstan which took almost a month, then on to Kyrgyzstan, Russia, before crossing the European countries of Ukraine, Moldova, Romania, Hungary, Croatia, Slovenia, Italy, France then finally arriving in the United Kingdom.

Inspired to Cycle to London

It all started in 2011, when Jacky was introduced to a man who goes by the name Cikgu Adnan. Adnan was, at the time, in his seventies and planned to make the journey to London by cycling with his son.

Within the span of a week, Jacky wandered into a motorcycle shop and noticed a book about 4 motorcyclists who had made the same journey in two months. Invigorated by their stories, he took it as a sign and was inspired to start planning his own journey.

Upon bringing up the idea with his wife, she told him “You have to do it. If not, you’re going to regret it for the rest of your life.” Surprised by his wife’s enthusiasm, it was not an easy decision to make, but it just got easier.

In his early 30s at the time, and with a new born baby on the way, being away from his family for such a long time was a big decision. But he began to plan.

When inquired about his motivation, Jacky provided a little background about his family and upbringing. His family was in the hawker food stall business, a very simple life.

Yet, he noted that they tended to be quite negative and pessimistic. Not wanting to affected by their attitude, he used it as fuel to motivate himself to be positive and provide a more positive outlook on life for his daughter.

Instead of telling, he prefers to show and demonstrate that great things can be achieved with a more positive perspective on life.

Asked about the effect this endeavour has had on his daughter, he said he hasn’t told her the whole story, but she knows a little.

About 9 years old at the moment, he believes she’s too young to comprehend the distance of how far London is, how challenging the journey, and how difficult it was to overcome the obstacles; but she will one day.

Actually I do this for my daughter. To inspire her to be positive, to be healthy. There were a few moments when I almost gave up, but I told myself ‘Hey, you just started. Maybe 20% of the way.’ One day my daughter is going to grow up, and she’s going to know what I did for this journey. She will definitely know. And when she grows up, I’m so worried that she will ask me this question: ‘Daddy, you already half way, why you give up ?’ This is a question that I can not answer. And maybe this might effect her life. So, I told myself, ‘Die, die, you have to finish. You can not give up half way’.

In the mountains of China, at an elevation of 4,200m above sea level, in heavy snow and strong winds, suddenly a van pulls over and forces Jacky in, and puts his bicycle in the back.

Feeling like he was practically kidnapped, the man didn’t say a word. Eventually, the driver asks ‘Where did you come from?’ and he told him Malaysia.

“Malaysian people must be crazy. In my life, 30 years driving up and down this mountain I have never seen anybody on a bicycle! You were going to die if I didn’t put you in my van. Now I will send you to the nearest safe place.”

The remainder of the journey was no where near as dangerous, in fact it was quite scenic and full of adventure, kind and wonderful people along the way, and mind expanding experiences.

After his journey, he mentioned “My welcome home was a nice surprise for me. When I got to the airport my friends and family had put up a big banner to welcome me home.”

Jacky’s Journey is recounted in his blog on moocycle.com and thus far only up to the Ukraine portion of the story.

Stay tuned for his European stories, his warm welcome in London, and even a story involving Datuk Lee Chong Wei and the Sultan of Kedah.

Basikal Lajak: Cyclists And Parents Had Been Warned Against Illegal Bicycle Mods