My fellow bibliophiles, this is for you! 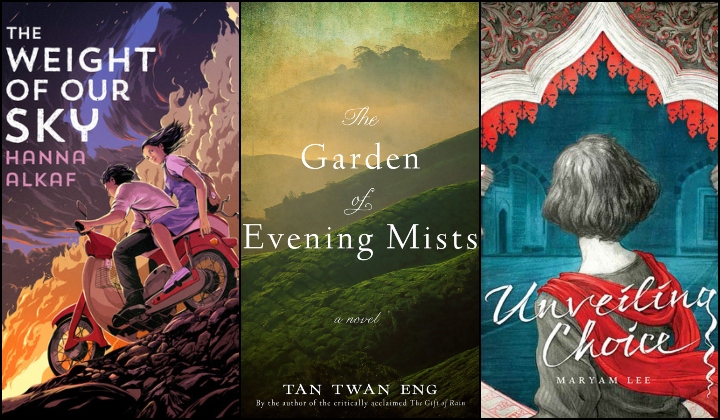 Looking for something to read while under the (recently extended) Conditional Movement Control Order (CMCO) but you can’t find anything worth your attention?

Well then, worry not because this list of books written by some of Malaysia’s finest authors might just solve your problem.

1. The Weight Of Our Sky – Hanna Alkaf

Okay, so you may have seen this book placed on the front shelves of several bookstores for some time now, but there’s a reason why this story hits home for myself and many other readers as well.

The Weight of Our Sky centers around 16-year-old Melati “Mel” Ahmad, a music lover diagnosed with Obsessive-Compulsive Disorder (OCD).

With the help of a Chinese boy named Vincent, Mel sets out to save her beloved mother from suffering a horrific death as forecasted by a djinn she harbours inside of herself.

Set during the May 13th, 1969 racial war, The Weight of Our Sky covers sensitive issues such as racism, mental illness, and death in a way that allows the audience to feel Mel’s pain at the turn of every page.

Additionally, what makes this story so special, is the portrayal of mental illness in a time where issues such as Mel’s OCD were barely understood , commonly overlooked and poorly treated.

Overall, Alkaf’s story is a brutally honest reimagining of a time that once broke the streets and people of Malaysia.

For more information on this story and Hanna’s other works, check out her website HERE.

You might want to prepare some tissues because this story is a real tear-jerker.

The Rice Mother talks about the story of a 14-year-old, Sri Lankan named Lakshmi who was traded into marriage to a supposedly wealthy Malaysian man.

Unfortunately, she soon learns that her new husband, Ayah, is neither rich nor reliable.

Raising 6 children, one born each year until she is 19, Lakshmi becomes an invincible monarch, determined to find a better life for her children amidst the nightmares of World War II and the Japanese occupation.

Despite escaping the horrors of the world, the family did not survive unscathed, bearing deep scars that pass onto the next generation.

This heartbreaking tale is a must-read as it touches on heavy topics such as immigration, broken dreams, and the scars that shape us as individuals.

Now if you are a fan of short stories, then this anthology is just for you!

Critically acclaimed both here and overseas, Lake Like A Mirror features a collection of 9 short stories, mostly describing the marginalized societies living in Malaysia.

Each story within the book is one of a kind as it contains topics such as victim bullying, mental illness, unique familial relationships, ethnicity ostracising, and much more.

The beauty of this book shows how the author captivates her readers into a rich atmospheric world as seen through her writing style.

Originally written in Chinese, the short story series was translated into English by Natascha Bruce after it was found by British publisher Granta.

Originally from Kedah, Ho started her career in engineering before treading on her literary path.

She later went on to graduate with a Master’s degree in Chinese literature in Taiwan, eventually receiving a doctorate at the Nanyang Technological University in Singapore.

Before we get into this book and its contents, let us take a moment to admire this stunning cover! *cue heart eyes*

But on a more serious note, Unveiling Choice follows the author’s quest for liberation amidst an oppressive society.

This non-fictional story talks about the long process of “dehijabbing” or the removal of one’s religious headscarf when going out in public, hence the title “Unveiling Choice”.

What’s interesting about this story is how it is meant to inspire empathy and compassion among Muslim women, specifically those who have been in similar situations as the author.

Despite this being Maryam’s first-ever book, Unveiling Choice is a powerful and thought-provoking piece as it contains her experiences of being picked on by the public after deciding to not wear a hijab.

Being a winner of multiple literary awards, this particular novel centers around a forbidden relationship between a former Malaysian Chinese prisoner and a Japanese gardener.

Garden Of Evening Mists follows the story of Teoh Yun Ling, a prisoner taken into captivity by the Japanese during World War II.

After losing her sister, who was also taken captive, Yun Ling decides to create a garden in memory of her late sibling by serving as an apprentice to a Japanese gardener known as Nakamura Aritomo.

Taking place during three separate periods, the story covers Yun Ling’s journey and the experiences that she faces during those three different periods in her life.

Going into this book, readers would soon discover how each page focuses heavily on myriads of historical issues faced back in the day.

Additionally, it also cleverly discusses the role of one’s memory, and the relationship between remembering and forgetting.

Overall, Garden Of Evening Mists is a novel that would be difficult for readers to put down, as there are many layers to this book.

Having been Eng’s second English-language novel, Garden Of Evening Mists was widely praised by many. Critics from far and wide complimented Eng’s writing, stating that he writes with such breath-catching poise and grace.

So there you have it! 5 fantabulous books written by some of our best local authors of today.

We know that 2020 has been nothing short of a bummer, but hey, hopefully this article gives you a little something to look forward to whilst being under quarantine.

“The Art Of Racing In The Rain”: An Absolute Tear-Jerker For Dog Lovers

Book Sales Are Up During Pandemic