It is one of eight hornbill species found in Sarawak. 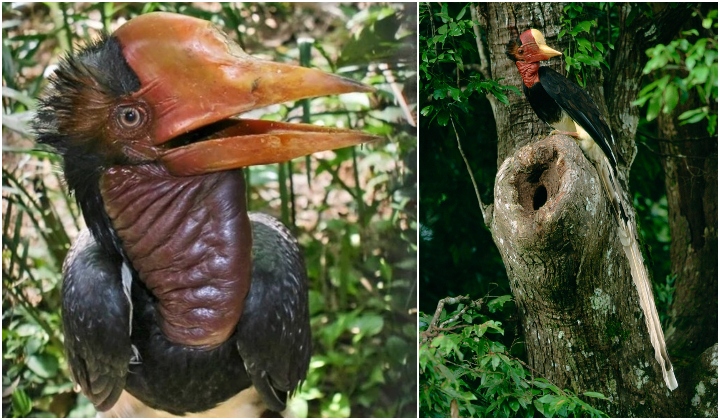 Helmeted hornbills (Rhinoplax vigil), the largest hornbill not just in Sarawak, but also in Borneo, is now critically endangered.

Local zoologist Jason Teo warned that the survival of the animal, one of eight hornbill species in Sarawak, is under threat due to years of poaching and the destruction of its natural habitat.

Jason Teo who is a graduate of Universiti Malaysia Sarawak and a member of the Malaysian Nature Society (MNS) Kuching branch shared the worrying news through a video on his YouTube channel, Jason The Zoologist.

Found in the evergreen forests of Southeast Asia, including Malaysia, Borneo, Sumatra, Thailand and Myanmar, the helmeted hornbill is a unique animal. It is the only hornbill species in the world with a solid casque.

All other species of hornbills have hollow casques.

The helmeted hornbill uses its casque to fight by literally head-butting each other until one gives up.

According to Jason, bird watchers nickname the bird as “the phoenix” due to its huge size. The helmeted hornbill can grow up to 120cm in length (4ft), which is roughly the size of a child.

(Despite its size) It can still fly and it has a very beautiful long tail, just like the phoenix.

Its call is a noisy series of hoots followed by a spooky “laughing” sound, often described as “maniacal”. You may listen to the bird’s call in the video below:

To put the animal’s survival threat into perspective, Jason explains that the helmeted hornbill’s critically endangered status makes it one stage away from becoming extinct in the wild, and two stages away from becoming totally extinct.

In short, if things don’t change, the helmeted hornbill may go extinct. Not just in Sarawak, not just in Malaysia, but the whole world.

Helmeted hornbills are killed by poachers who remove and sell their unique casques on the black market. A total of 2,871 helmeted hornbill casques were confiscated from 2010 to 2017 by authorities in Indonesia and China alone.

This is a serious issue because helmeted hornbills breed very slowly.

The slow-breeding birds are particularly vulnerable to poaching because they mate for life. When ready to lay their one or two eggs per year, the male uses mud to seal his female mate into a protective hole in a tree. The male then feeds the female and chicks through a slit, meaning if the male is shot, the whole family starves.

Jason also points out that the total number of casques confiscated by authorities are only the ones they found. The number of successful trades not caught is still unknown.

Fortunately, all is not lost yet and helmeted hornbills can still be saved.

Jason highlights the rescue story of the giant panda. The world successfully reverted the giant panda’s endangered status back a stage. The panda went from being “endangered” to just “vulnerable”.

The giant panda is a miracle. People started becoming aware and then a lot of money and effort were put into conservation and research. It was a conservation miracle.

What can I do to help?

Firstly, by serving as the eyes and ears of the authorities to stop the activities of poachers who hunt and sell the helmeted hornbills solid casque.

Please go through the contact list and save them in your phone. Remember, things will only change if we all play our part.

Jason’s second recommendation is for the public to donate to non-governmental bodies which work tirelessly to preserve and conserve helmeted hornbills and their habitat.

For Malaysian efforts, the public can donate to the Malaysian Nature Society (MNS). Jason suggests that those interested should request MNS to use the donation on hornbill or helmeted hornbill projects.

For Indonesian efforts, the public can donate to Rangkong.

For international efforts, the public can donate to Birdlife International. Those interested should also request that the donations be used on helmeted hornbill projects.

Jason’s last recommendation is raising awareness, just like in the situation of the giant pandas.

As people became more aware of the giant panda’s plight, they fell in love with the animal and a lot of money and effort were put into conservation and research of the giant pandas which resulted in the preservation of their species.

Remember, the best way to save an animal is to make everyone fall deeply in love with it.