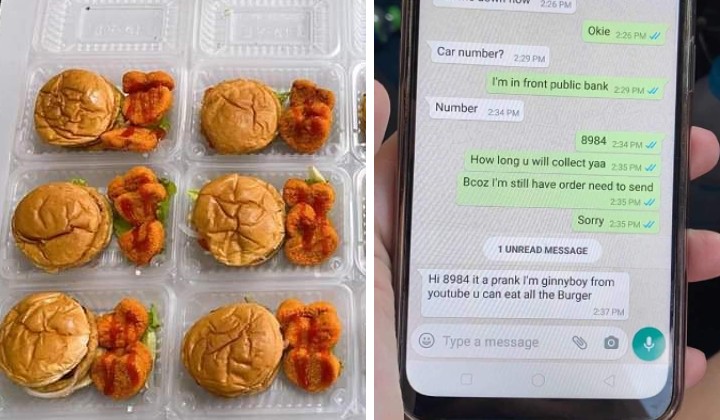 While some people are trying to stay alive during this MCO by starting their own home business making and delivering food, some actively want to watch the world burn.

A prankster ordered 20 burger sets worth a total of RM140 from a homemade burger seller, asking for it to be delivered to a Public Bank branch off Jalan Klang Lama.

When the seller requested that the money banked in beforehand, the prankster faked not knowing how to use online banking, claiming that “her son went out already”. The prankster then assured the seller that they will pay in cash.

The seller then made the food and waited for the prankster to show up, only to be met with a dismissive Whatsapp message that told her it was merely “a prank”, and claimed to be “ginnyboy from YouTube”.

Netizens readily assumed that this was meant to frame local content creator Jin Lim who goes by the moniker Jinnyboy, as the name was misspelled. A quick YouTube search finds no revelant results for “ginnyboy” other than an account with 3 subscribers and videos from 7 years ago which were not filmed in Malaysia.

Jin Lim himself has made a public announcement on his Facebook account as well, stating that “my last prank was on radio, almost 7 years ago”. He then suggests that the prankster be reported to the police.

Since the original tweet included the phone number of the prankster, many netizens have tried to call and text the number without any success. It is believed that the prankster has since switched off their phone.

Other netizens cautioned for online sellers to always ask for payment first to protect themselves from unscrupulous buyers.

According to the Tweet, all 20 burgers were sent to an orphanage home.