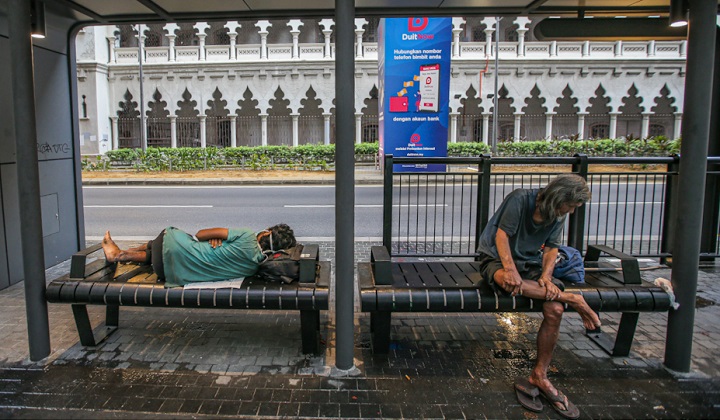 When the Movement Control Order (MCO) kicked in on 18th March, the entire nation was instructed to stay at home.

But it wasn’t long before people started asking; What about those who don’t have a home to stay in?

The homeless were one of the highest risk groups, exposed to the world with barely any protection against the weather, let alone a virus spreading around the globe like wildfire.

Soon thereafter, Kuala Lumpur City Hall (DBKL) set up temporary shelters for the city’s wanderers. At least 800 homeless people were screened and given a place to sleep in four community halls around KL.

On usual days, the NGOs have an army of volunteers distributing food on specific days around the city, but now they’ve turned their attention to feeding the very same people now under refuge at the DBKL shelters.

Charles Mohan from Institut Onn Ja’afar (IOJ), a non-profit organisation that’s been helping the poor and vulnerable since 2014, admits that DBKL has been quite efficient in creating a system for NGOs to feed the homeless.

Since the MCO began, we just handle food preparation and drop them off at the shelters. DBKL and The People’s Volunteer Corps (RELA) personnel will then distribute the food among the homeless.

According to Koperasi Warga Wawasan Malaysia Berhad, another NGO also involved in feeding KL’s homeless population for 5 years, DBKL has prepared a timetable for NGOs to come and distribute meals at set times, dates and locations.

What goes on inside?

Inside the shelters, the homeless are given a mattress, pillows, towels and toiletries donated by NGOs such as Koperasi Warga Wawasan Malaysia Berhad.

Initially, the mattresses were placed on the floors with a “one mattress, one-metre apart” policy. However, social distancing concerns were raised shortly after and orange tents were provided so that each person gets a cubicle of their own.

Everyone wears a face mask and few people are allowed in. People who showed up at the centres looking for food and a place to sleep had to undergo medical screening first.

The new guidelines are understandably part of the social distancing measures to protect both the NGOs and the homeless from Covid-19, but the NGOs do admit that they have concerns on addressing the needs of the homeless without face-to-face interaction.

About 20 to 30% of the homeless are sick and elderly. Usually, they will tell us about their conditions or if they’re in need of any medications or essentials during our weekly street feeding and we’ll do our best to assist them.

Nonetheless, the overall consensus is that the homeless folk inside these shelters are being taken care of and the NGOs are committed to keep supporting DBKL and the homeless.

Post-MCO jobs for the homeless?

Federal Territories Minister Tan Sri Annuar Musa recently announced that the 800 or so homeless people in the temporary shelters will be offered jobs post-MCO.

While many have lauded the measure online, the NGOs who’ve spent years with this community are less enthused.

It’s too early to give them jobs. There needs to be thorough research for the longevity of the homeless people in jobs. You also have to ask if they’re disciplined enough to stay in this system.

A representative from Koperasi Warga Wawasan Malaysia Berhad told us that the homeless also need psychological support as these are people who’ve been abused and exploited.

Charles also explains that the homeless have problems remaining in one place, having been used to a life of wandering on their own terms. There’s also a significant percentage of elderly homeless folk who simply cannot work, thus highly likely to return to the streets.

Even with a job placement training, there’s no guarantee as KL’s homeless population is expected to increase as businesses struggle to stay afloat, resulting in people losing their jobs and ending up on the streets. There are even cases of landlords chasing tenants out for not being able to pay rent. Families are going hungry as daily wage earners cannot find income.

KL Sikhs Community Services, another NGO that’s been feeding the homeless since 2015, told us that they’ve switched to donating dry essentials and groceries to these affected groups.

We’ve seen many elderly and foreign workers affected by this economic downturn. They can go out to buy, but with what money?

According to Charles of IOJ, the solution would be to set up more transit homes to address the basic needs.

It’s not an overnight solution, but in the transit homes, they’re at least given the opportunity to get back in the system. Of course, they need to be given psychological and moral support as well.

If you’d like to show your support to the NGOs above, reach out at Institut Onn Ja’afar’s website (HERE) and KL Sikhs Community Services’s Facebook page (HERE).