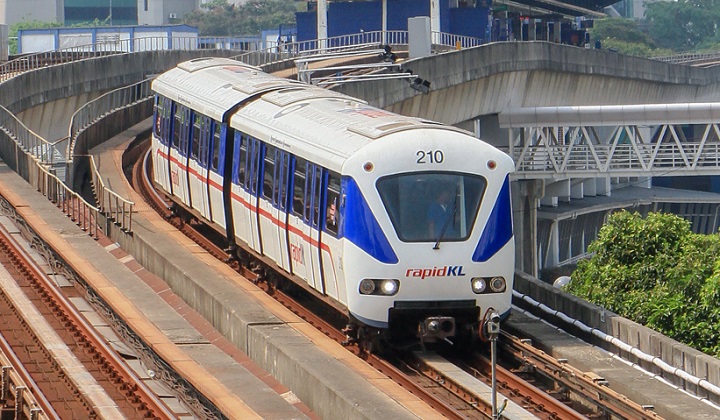 [Article has been updated to include additional information from Prasarana Malaysia.]

How many times have you faced the following scenario:

Eagerly awaiting the nice 4-coach LRT train to carry you to another day of productive working, when suddenly you see something that stops your heart.

We know, taking this particular coach dampens your spirit as much as the damp armpits of other passengers squeezed together.

And many times, the question on everyoneâ€™s minds is: â€œWhy is LRT still using the 2-coach trains???â€

Well, wonder no more. RapidKL has finally given us an answer to this mystery on their official Twitter account.

Rush hour on weekdays range from 7am â€“ 9am and 5pm â€“ 7pm. To keep up with the surge of commuters and reduce congestion, the LRT trains have to arrive every 3 minutes.

54 sets of trains need to run simultaneously to achieve the 3-minute frequency. While the Kelana Jaya line has 64 train sets, only 43 sets are 4-coach while 21 sets are 2-coach.

Hence, the need for the 2-coach trains to reduce waiting time during the vital rush hour. The 2-coach trains are also usually parked at pocket tracks to help ease congestion at platforms during peak hours.

While the train frequency is slower on weekends, the 2-coach trains are still vital because this is when the 4-coach trains undergo their scheduled maintenance.

Thatâ€™s it. Thatâ€™s the only two reasons given on why the 2-coach trains are still in operation.

While the reasoning may do little to ease your 2-coach train ride woes, perhaps the addition of 27 new train sets for the Kelana Jaya line will.

The Star announced back in April 2019 that Prasarana Malaysia (operators of the LRT) will be welcoming the new train sets from the first quarter of 2020. Itâ€™s expected that all 27 will arrive within 5 years.

Not only will the line be welcoming brand-new trains, but
he existing 2-coach trains will be refurbished to 4-coach train sets!

Under the Rapid Railâ€™s (the subsidiary of Prasarana that runs RapidKL) Mid-Life Refurbishment Project, 34 sets of 2-coach trains were merged (or â€œmarriedâ€) to form 17 sets of 4-coach trains.

FYI, the 2-coach trains have a lifespan of 30 years and they’ve actually been in operation since the Kelana Jaya Line opened in 1998!

â€œBasically, what we did is that we cut off the front ends of two 2-car sets; and marry them together, to transform them into a four-car set with added new features.â€

The marrying of the 2-coach trains to form 4-coach trains and its use on the Kelana Jaya line is expected to be completed by 2020.

Which means NO MORE traveling on the 2-coach trains!

Thereâ€™s also a target of improving the train frequency to 2-minute intervals. So if youâ€™re one of the long-suffering LRT passengers, have patience as itâ€™s all about to come to an end.

In the meantime, come reminisce with us on our list of â€œ16 things only Mâ€™sians who take LRT to work will understandâ€ (HERE).

Or if you know any train user who needs some train etiquette reminder, check out our compilation of â€œ10 Basic Public Transport Train Etiquette Malaysians Keep Forgettingâ€ (HERE).