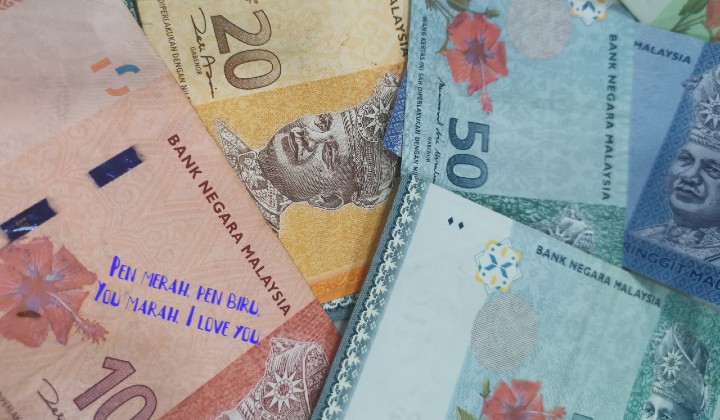 You might think that money is still money, no matter what. But it turns out there are a number of things that could actually make your banknotes valueless andâ€¦basically useless.

Besides being the only legal organisation to issue Malaysian banknotes and coins, Bank Negara Malaysia (BNM) is also responsible for making sure that the Malaysian currency that passes through our hands on a daily basis are in good condition (read: clean and pretty).

Trying To Get Fit Like GIF from Healthy GIFs

For one, this ensures that the notes and coins can be easily and reliably checked for genuineness. Besides that, the cleanliness of our banknotes will, to some extent, be reflective of the image of the country.

To figure out whether or not your banknotes have value, you can carry out a â€œfitness checkâ€ on each individual banknote and coin. Yep, even money has fitness tests.

Notes and coins that fall below the accepted quality are labelled as â€œunfit currencyâ€.

Itâ€™s those banknotes that have been in your friendâ€™s pockets for too long while they sweated in the sweltering heat of Malaysian weather. The type that when you hold it youâ€™re also like â€œeuwâ€.

Sometimes the money also smells like their sweaty pocket. Though we would not recommend that you do a smell test.

You know those banknotes that get smushed into your wallet in a panic after you pay for your lunch in line at a busy food court?

Yeah, those are technically unfit currency now. So try not to do that anymore, okay.

Also, now you know that exposing that new plastic-y notes to heat will make them melt and shrink.

Just because money is â€œtechnicallyâ€ made from paper, that doesnâ€™t mean you should write on them. And even if you do, you should know that these notes no longer have any monetary value.

So, make sure itâ€™s worth it. Like getting the autograph of a famous person, or writing on it to mark a special occasion. That way, even if theyâ€™re valueless, they are also priceless.

You know those notes that look like theyâ€™ve had a really hard life.

Like, theyâ€™ve been through so much that now the ink on the notes have started to fade. Yeah, have those changed. Itâ€™s time to let them rest.

These are literally the worst. Sometimes the aunty at the food court wonâ€™t accept them and the autopay machines will always reject them.

How does one accidentally tear money?! And how did it end up in MY wallet???

Personally, weâ€™ve never seen these ourselves. But like, seriously thoughâ€¦what happened?

Wait, what? But thatâ€™s basically all our banknotes.

No wonder autopay machines always spit these back out.

On top of that, we believe that termite-infested notes are probably a sign that you might have an even bigger problemâ€¦

Composed banknotes are banknotes that are made up of two or more different banknotes being taped together to create a single banknote.

Yes, that shiny thing that runs down the side of your banknote isnâ€™t just to make the note look good. That holographic design LEAD (Longlasting Economical Anticopy Device) strip is meant as a security feature. There are other security features on our banknotes too.

If these get worn or removed, your money cannot be used anymore.

Thankfully all monies falling into any of the 12 categories mentioned above can be replaced or exchanged for fit currency at any BNM branch or bank.

Only counterfeit banknotes cannot be exchanged for valuable currency.