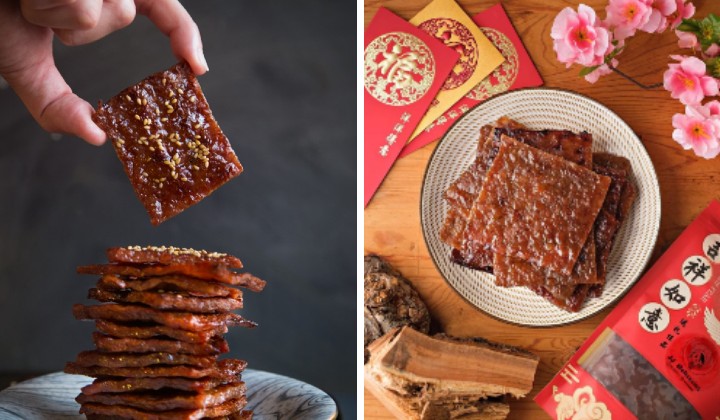 Bak kwa which means dried meat in the Hokkien dialect is among the popular treats for Chinese New Year.

The savoury sweetmeat traditionally takes the form of thin square slices and is usually made from pork.

Bak kwa varies in appearance from brown to red, depending on the colouring additives contained in the meat.

The deep red colour is considered auspicious in Chinese tradition, symbolising good luck and believed to ward off negative energies.

Hence, bak kwa is often presented as gifts to relatives and business associates during the festive season.

It was reserved as a Chinese New Year treat as the pork was a delicacy not many could afford, especially among the early immigrants, and the tradition remains until today.

The delicacy has since taken on local characteristics where it is grilled over charcoal instead of cooked over a hot plate, as is traditionally done.

The local version is also sweeter than the original.

Some continue to make bak kwa manually and are getting more popular daily, though some buck the trend.

So How Is Bak Kwa Made?

There are two types of bak kwa: sliced and minced meat.

The process includes the following:

A good bak kwa is roasted using charcoal instead of an electric oven, which is more straightforward.

Changing With The Times

While the traditional background remains widely loved, many new and unique flavours have emerged.

It’s a matter of maintaining a balance between tradition and innovation.

But no matter how the flavours evolve, bak kwa’s sweet barbecue taste and bright red colour have been and will continue to be synonymous with Chinese New Year.

In recent years, pork-free bak kwa made from chicken or beef has been gaining popularity among Malays.

Why Is Bak Kwa So Expensive?

There is usually not much business for bak kwa sellers except when Chinese New Year is around the corner.

Hence, sustaining a bak kwa business is difficult, and consumers have no choice but to buy it during peak season, even at a higher price.

Bak kwa can only be kept for a short time, and most of the time, must be consumed within a month of purchase.

In the past, people usually give biscuits as presents during Chinese New Year instead of bak kwa.

Nowadays, friends and relatives exchange bak kwa as a small token of appreciation, adding to the rising demand.

It is not unusual for people to queue up for a long time to get their favourite bak kwa, especially in neighbouring Singapore.

“@kennysia: SINGAPOREANS. Y u queue up long long to buy bak kwa during office hours? No need to work is it!? pic.twitter.com/H9IFHDJI”