The mother would buy a thermos each time her son brought her to Starbucks. 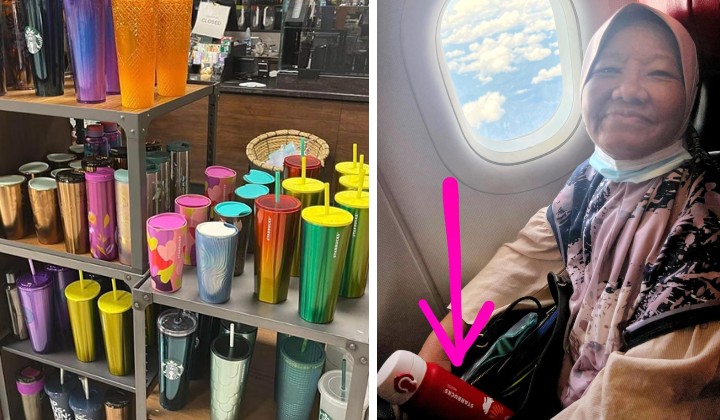 To downplay his purchase of an expensive thermos for his mom, a man told her that the Starbucks thermos he bought only cost RM20 when the actual price was much higher.

But he never thought he would get into “trouble” and cause heated discussions among netizens.

Netizen Syukor Majid shared an interesting story about himself and his mother on Facebook a few days ago.

One day he brought his mother to Starbucks for coffee, and his mother admired the Starbucks thermos very much.

He said that at the time, out of “good intentions”, he lied to his mother that the thermos bottle only cost RM20.

But his mother became ‘addicted’ to buying it.

Each time they went to Starbucks, his mom wanted to buy a thermos.

I bought one, and my mother asked how much it was. I said RM20, because I knew that if I said RM200, she would definitely not want it. But who would have thought that because of my dishonesty, every time I took her to Starbucks, she would bring one home.

Netizen Syukor Majid on her mother’s love for Starbucks tumbler.

He contemplated if it was time to tell her that the actual price of the thermos was not RM20.

Some netizens said that because the mother is happy, he must buy more tumblers for her.

Others joked that the mother knows the price but doesn’t mind as the son is paying.

What Is The Purpose Of A thermos?

The air between the two walls is sucked out during construction, creating a vacuum to keep hot things hot.

A thermos is designed to keep hot things hot by not letting heat escape.

Thermos is used to keep beverages hot or cold for extended periods and for keeping cooked food hot.

For all of my Starbucks lovers out there, Malaysia is the place to be.😍

p.s. you bet I bought that thermos! pic.twitter.com/djFssBiUKA