The contestant had to answer a RM34,000-worth question asking in which country did Anwar Ibrahim become the Prime Minister of. 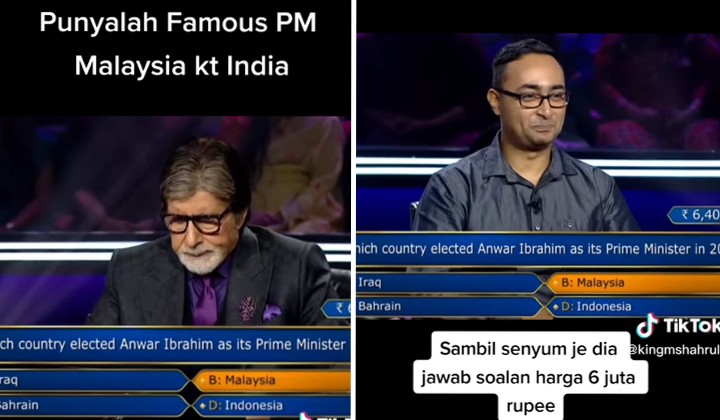 For those doubting Anwar Ibrahim’s international popularity, well, you’ll be surprised to know that he is quite well-known too in other countries.

Not only did he receive a ton of congratulatory wishes for being the 10th Prime Minister of Malaysia from leaders all over the world, but his name made it into general knowledge trivia in India!

Who Wants To Be A Millionaire? game show in India

In the Who Wants To Be A Billionare? (Kaun Banega Crorepati/KBC) game show aired on 23 December in India, a contestant named Nipun Ranjan was asked a general knowledge question by the host, Bollywood superstar Amitabh Bachchan.

Which country elected Anwar Ibrahim as its Prime Minister in 2022?
A. Iraq
B. Malaysia
C. Bahrain
D. Indonesia

For us Malaysians, we might answer this in the blink of an eye, but for Nipun Rajan from Delhi, he had to think for a bit.

After being presented with the four options, Nipun said that based on the names of the countries, it could be any one of them.

“I may have read somewhere recently, so I am going with the option B – Malaysia,” Nipun told Amitabh.

He failed the 12th question

Unfortunately for Nipun, right after the Malaysian Prime Minister’s question, he failed to answer the 12th question correctly which was worth around RM67,000.

The question entailed which one of the four names was an executive producer for the Marathi film ‘The Disciple’. He had to use two lifelines – Phone a Friend and 50:50 – to answer the question but still got the wrong answer.

The video clip of the question on the show was shared on TikTok by @kingmshahrul1 a day ago and has since gone viral with 289.7 K views and 10.8 K likes at the time of writing.

Netizens there were quite impressed with Dato’ Seri Anwar Ibrahim’s popularity internationally. They’re proud that DSAI is known all over the world as a Malaysian leader.

“Wow, his name made it into an Indian quiz, man.”

“Eh, he is even famous in Bollywood”

“The question for our Malaysian Prime Minister is worth RM34.2 K. Wow”

“He’s in general knowledge. That means the whole world read the news of our Prime Minister”

Besides that, some people even joked about how this question made it into their trivia game show.

“He answered correctly, he must be a Pakatan Harapan guy. Perikatan Nasional guys are going to hate him”

“This must be the works of DAP contacting Amitabh Bachan”