A Twitter user wanted a partner with a MUET band 4 or higher. 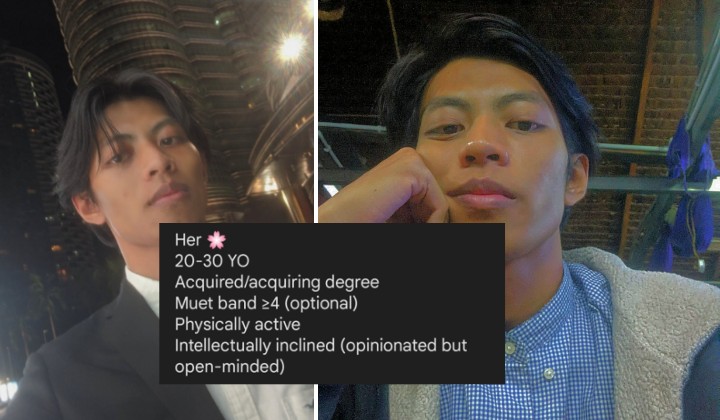 A single and looking 24yo man recently cast his net for a dating partner on Twitter, but that wasn’t the surprising thing.

Other than the usual criteria of age and personality, Twitter user Arjuna also wanted someone with an English proficiency of MUET band 4 and above.

Although Arjuna also stated that this is optional, the internet has become divided over this unusual academic requirement.

The bands go from 1.0 to 5+, with band 4 being akin to a “B2” grade and showing an “independent” proficiency in the English language.

Some find the requirement classist

I don’t feel comfortable with the ‘I don’t date men who’s not smart / cannot speak english, not my level’ talk right now… Too classist for my taste..

Tak sekufu tu dah la don’t have to insult people who didn’t get as good education, you know?

Others agree that language proficiency is needed

If you don’t get why he’s asking for MUET band 4 requirement, you’re probably one of the reason why he came up with such requirement.

Arjuna’s one Tweet has sparked a conversation about communication, language proficiency and its strong correlation to better education and opportunities.