The series trended on TikTok with over 200 million views on the app. 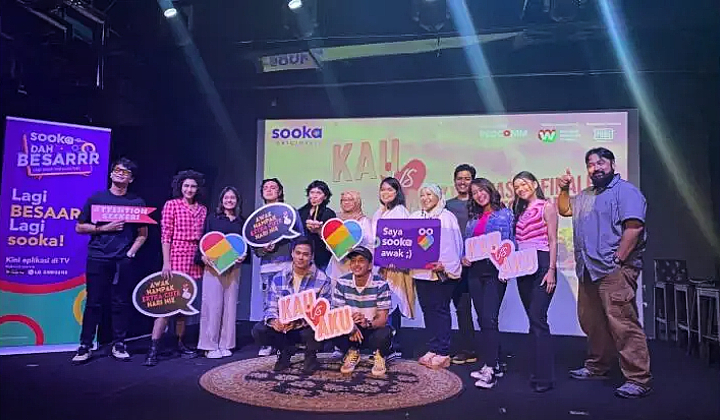 The serial drama, Kau Vs Aku, that spanned over 8 episodes and garnered over 200 million views on TikTok has drawn the curtain with the premiere of its final episode on 9 September.

Sooka celebrated this success by holding a screening of the final episode where fans had the opportunity to watch together with the cast lineup at The Bee, Publika.

An adaptation of Sheiyruna’s Wattpad novel

Since its launch on August 19, the series adapted from a Wattpad novel written by Sheiyruna has emerged as the top series with the highest number of views on the Sooka app.

Kau Vs Aku was created to cater to the tastes of online gaming fans, novelists and teens in Malaysia, and we are delighted with the overwhelmingly positive and encouraging response from fans.

“The number of views exceeding 200 million on TikTok is a benchmark for the high demand for this series, which has contributed to our growing number of VIP subscribers since it was launched,” she added.

One year in the making

According to Emakarina, the series that has also recorded more than 2 million reads on Wattpad took a year to produce.

Since the Sooka app is currently only available for subscription in Malaysia, they are also in the process of bringing the show to international audiences due to the demand from Indonesia and Singapore.

A brief synopsis of Kau vs Aku

This high school drama tells the story of a 16-year-old girl named Aulia Zulaikha who aspires to be a writer. But her life takes a turn after the Insta-famous boy she is interested in moves to her school.

The story also portrays how Aulia tries to defend her morals and principles as she goes through a rollercoaster of emotions in life.

Watch Kau vs Aku on Sooka!

Binge-watch all 8 episodes through the boxset collection by subscribing to the Sooka app with the VIP Entertainment plan at only RM15.90 a month.

For those who prefer watching on a bigger screen, you can subscribe to the VIP TV plan at RM84.90 a month.