The fireman standing beside the boy in the float rushed to cover the boy’s hand. 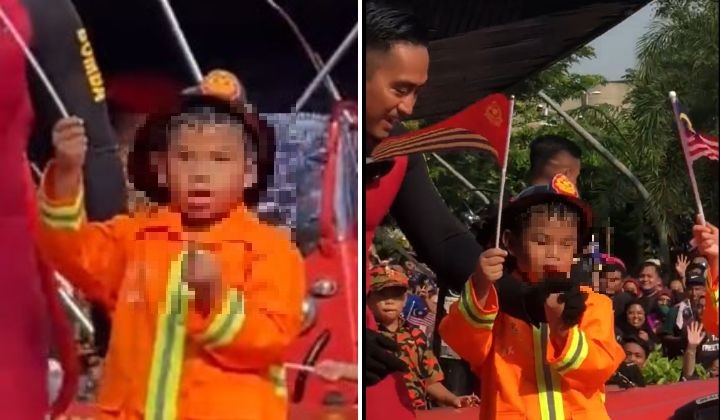 After two years of not holding a National Day parade due to the pandemic, the 65th National Day celebration this year featured several entertaining surprises.

Unfortunately, a poor boy accidentally surprised everyone watching the parade when he showed a middle finger.

The young boy, who wore a tiny fireman’s jacket and hat, stood in a boat that was fashioned into a parade float.

He was supposed to hold up a ‘mini love’ sign with his fingers as the float went past the crowd.

However, he held up a middle finger instead to the shock of the people watching. The fireman standing beside him quickly tried to cover his hand when he realized the mistake.

In another video, the young boy explained that he held up the middle finger because he didn’t know how to do the ‘mini love’ symbol. He also said he was tired and planned to skip school out of embarrassment.

Netizens found the whole situation hilarious. Some joked that Malaysia could finally compete with a Singaporean boy who made a similar hand sign during Singapore’s National Day parade.

A few netizens pitied the fireman standing next to the boy too because he had to quickly try to ‘fix’ the boy’s finger position.

Fortunately, all was not lost for the little boy because he managed to hold out the correct ‘mini love’ symbol in the parade after the incident.

Wanna Go To The Merdeka Parade Tomorrow? Here’s How To Get There By Train