The professional working dogs won everyone’s hearts when they strutted in their tiny boots beside their handlers during the 65th National Day parade. 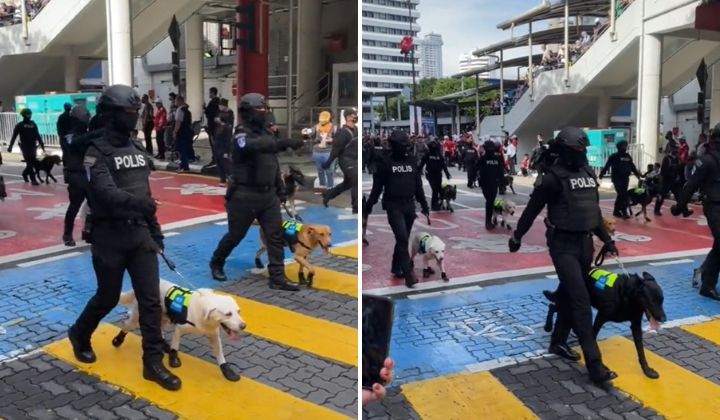 The 65th National Day parade is a cheery affair but it can be very formal in some ways.

Thankfully, the presence and inclusion of a group of police dogs in the parade brightened up everyone’s day!

Some Malaysians spotted these adorable dogs during the parade rehearsals early on but the excitement to see the dogs never went away even on the parade day itself.

What made it extra adorable was when people realized these professional dogs wore cute little shoes on their paws to protect their feet from the hot tar road.

Whether the dogs are the stoic German Shepherds or the cheerful Golden Retrievers, they strutted beside their handlers in their tiny boots.

In one of the videos taken during rehearsal day, spectators were greeted by a line of stern-looking German Shepherds and were surprised to see a happy Golden Retriever at the end.

Some netizens joked that the bashful-looking Golden Retriever got the job through a ‘cable.’

Netizens gushed at their tiny little shoes and even tried to guess how much the footwear cost.

Eagle-eyed netizens also managed to spot that one of the dogs was missing a shoe.

Due to the positive reception received, it looks like a parade to acknowledge the hard work of working dogs in the police and fire department is in order.