Maznah had been compared to Mui, a baker who uses tai chi to bake mantou in Stephen Chow’s Shaolin Soccer. 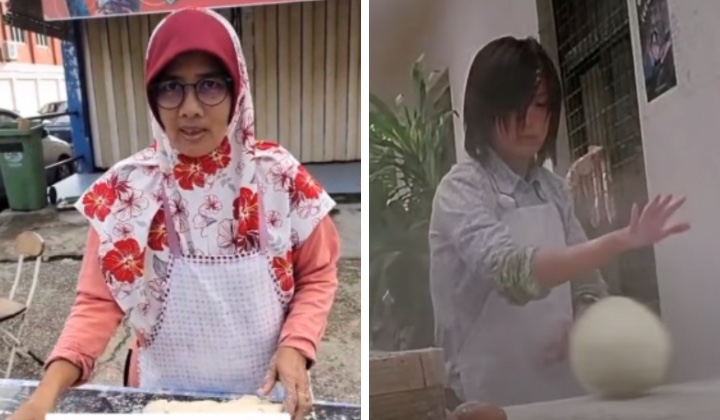 A Cantonese-speaking Malay woman separated from her elder brother for more than 10 years reunited for the first time when he gave her a call.

Maznah, who sells yau char kuai or Chinese cruellers (also known as cakoi in Malay), said they had been estranged for years due to differences in the family.

Cakoi :A evolution of the Cantonese word ‘yau char kuai’ that found its way into the Malay vernacular

For context, Maznah comes from a huge family of 16 siblings. She is 10th in the family, while her elder brother, who lives in Kuala Lumpur, is 7th.

We are so happy that we’ve been able to talk to each other again in our lifetime.

Senior citizen Maznah Abdul Aziz to TRP on her reunion with her elder brother.

Maznah said the brother had not ben in touch with the family since their mother passed away more than 10 years ago.

Meanwhile, Maznah said her business had improved tremendously ever since her Cantonese went viral.

Netizens praised and thanked Maznah for evoking nostalgia of Malaysia in yesteryears, when people were really close to each other regardless of race and religion.

She said many new customers straightaway speak Cantonese within they arrived at her stall at Karak’s main street.

Her customers said Maznah reminds them of Mui, a baker with severe acne who uses tai chi to bake mantou in Stephen Chow’s 2001 blockbuster Shaolin Soccer.

The character was played by mainland star Vicki Zhao Wei.

The Golden Years Of Cantopop

On another note, Maznah said she and her siblings grew up listening to Cantonese songs.

She recalled listening to classics 80s songs including those by Hong Kong singer and actor Alan Tam Wing-lun and Anita Mui, who was Hong Kong’s biggest female Canto-pop star.

Beside day to day interaction with kids from neighbouring families, our early experience with Cantonese came from TVB theme songs. TVB dramas and its memorable theme songs like The Bund were a main source of entertainment back then.

Senior citizen Maznah Abdul Aziz to TRP on how her family picked up Cantonese.

At the same time, Maznah said she is starting to listen to Mandarin songs.

When asked which is the more beautiful language, Maznah said as long as one grew up in a normal, loving family, whatever they spoke is most beautiful.